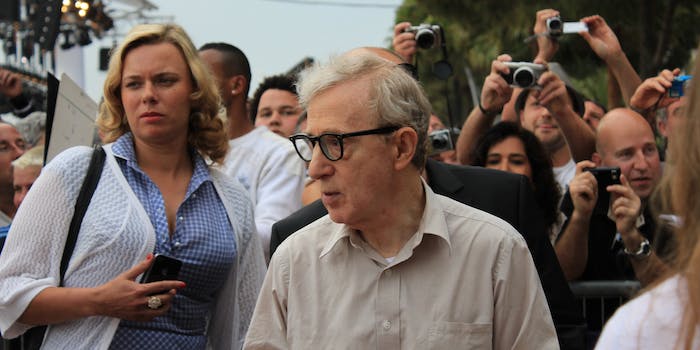 Surprise! Woody Allen regrets everything about his Amazon deal

Turns out making a TV show isn't the same process as making a film.

When Amazon first announced a deal with Woody Allen to make a six-episode TV show to air exclusively on Prime Instant Video sometime next year, Allen noted that Amazon Studios chief Roy Price would probably regret making that deal. We’re not sure how Amazon feels about it, but Allen already regrets it just a few months into the project.

At the time of the announcement, Allen’s fans and critics alike were baffled by the choice. After all, his statement suggested he didn’t even know how he got into the deal and he hates technology, and Amazon’s streaming service seemed like a weird fit. What could possibly go wrong? We lined up our popcorn.gifs in Twitter drafts and waited for it all to implode.

In an interview with Deadline promoting his new film Irrational Men, Allen confirms what we basically already know: This was a terrible idea for him. He signed up for the project after Amazon pestered him long enough, and he thought that it would be like making a six-part movie. And then he learned the lesson that every film and TV student does in college: They’re two different processes—and TV isn’t necessarily easier, even if he thought it beneath him.

“I have regretted every second since I said OK,” Allen said. “It’s been so hard for me. I had the cocky confidence, well, I’ll do it like I do a movie … it’ll be a movie in six parts. Turns out, it’s not. For me, it has been very, very difficult. I’ve been struggling and struggling and struggling. I only hope that when I finally do it—I have until the end of 2016—they’re not crushed with disappointment because they’re nice people and I don’t want to disappoint them.”

Amazon, please release him from his contract early so he can go on to making the same movie he has been his entire career without interruption.