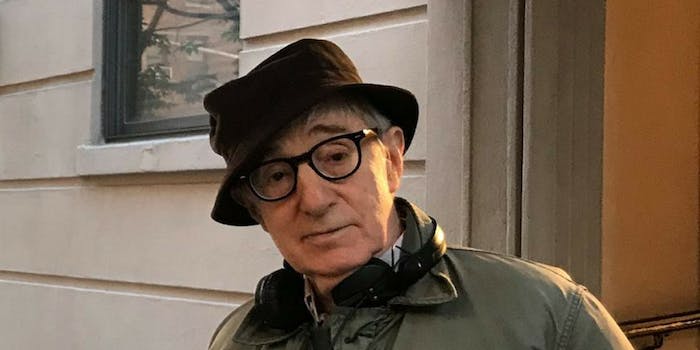 Is he that clueless...or that bold?

If critics found Woody Allen‘s comments about accused sexual harasser Harvey Weinstein indicative of his support of the mogul, the plot to Allen’s upcoming project A Rainy Day in New York certainly won’t keep them quiet.

According to Page Six, Allen’s latest film will contain scenes depicting an older man having sex with young starlets and models. It’s sobering plot point given Allen’s history for casting himself among much younger women and allegations he sexually abused his daughter, Dylan Farrow. Not to mention there is the current climate of sexual harassment and assault allegations made by tens of New York and Hollywood industry women against Weinstein, and now director James Tobak, many of the accusers in their teens or early 20s at the time the incidents reportedly occurred.

The script says the man, played by 44-year-old Jude Law, “makes a fool of himself over every ambitious starlet and model.” In scenes from the project, a character portrayed by Rebecca Hall accuses Law’s character of having sex with a 15-year-old “concubine,” a character portrayed by 19-year-old Elle Fanning, which would be legally defined as statutory rape. Fanning’s character then acknowledges the relationship but insists she’s 21 instead. Fanning’s character later questions Law about his infidelity, asking, “Were all these women for pleasure, or were you researching a project?”

Woody with Jude Law today in Greenwich Village, during the production of his 2018 film.

Amid the Weinstein scandal, Allen was criticized last week for saying he was “sad for Harvey” and for pushing back against Hollywood’s “witch hunt atmosphere,” though he later clarified that he felt that way because Weinstein “is a sad, sick man.” Allen’s son, journalist Ronan Farrow, contributed to the work exposing the allegations made against Weinstein, as he has long been a staunch defender of his sister who was allegedly sexually assaulted by Allen.

IndieWire points out that Allen has often rooted his work in relationships between younger women and older men, and has cast himself as the love interest of characters portrayed by women up to 37 years younger. This, along with Allen’s alleged history of inappropriate behavior, was not lost on the internet, which pointed out the parallels to the plot of A Rainy Day in New York.

Report: Woody Allen's New Film Is About Elderly But Pretentious Pervert Who Types Each Of His Actions As They Occur Into A Screenplay https://t.co/vaIwhQB1pW

This is why I cannot "seperate the artist from their work": Woody Allen's work is a reflection of his disgusting predatory history. https://t.co/kvZzaGwHy8

Allen’s representation did not return Page Six’s request for comment.