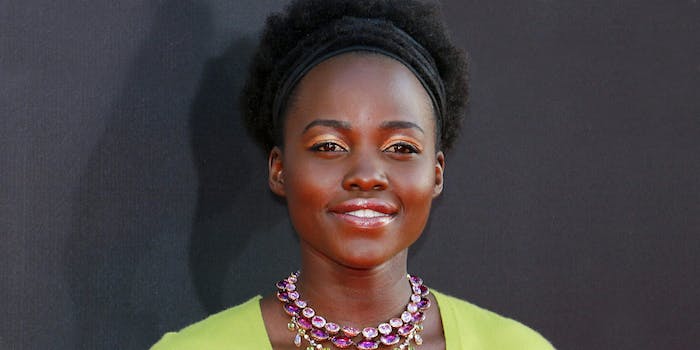 ‘Now that we are speaking, let us never shut up about this kind of thing.’

Oscar-award winning actress Lupita Nyong’o revealed that Harvey Weinstein repeatedly harassed her while she was a student at the Yale School of Drama, making her the latest actress to accuse Weinstein of sexual misconduct.

Nyong’o detailed her encounters with Weinstein in a New York Times op-ed published Thursday evening. Her experience, she wrote, took place over several years. As a student, she met Weinstein in Berlin in 2011, and she exchanged contact information with him in the hope that he would consider her for a role. A female producer warned her that Weinstein could be a bully, but Nyong’o didn’t notice any major red flags. Soon after their first meeting, Weinstein invited Nyong’o to lunch, where she said he refused to let her order juice and tried to pressure her into drinking a vodka and diet soda. He invited her to attend a film screening at his family home in Connecticut, and soon after they started the movie, he brought her to his bedroom and asked to give her a massage.

“For the first time since I met him, I felt unsafe,” Nyong’o wrote. “I panicked a little and thought quickly to offer to give him [a massage] instead: It would allow me to be in control physically, to know exactly where his hands were at all times.”

When he attempted to remove his pants, Nyong’o stopped and told him that she wanted to return to school if he didn’t plan to watch the movie. She wasn’t sure of what to make of the incident, which she described as “inappropriate and uncalled-for, but not overtly sexual.”

After another interaction that had been strictly professional, Weinstein invited her to New York to a screening and dinner, where he soon propositioned her.

Before the starters arrived, he announced: “Let’s cut to the chase. I have a private room upstairs where we can have the rest of our meal.” I was stunned. I told him I preferred to eat in the restaurant. He told me not to be so naïve. If I wanted to be an actress, then I had to be willing to do this sort of thing. He said he had dated Famous Actress X and Y and look where that had gotten them.

She refused. The dinner ended before it had even started, and Weinstein gave her money for a taxi, telling her that “I don’t know about your career, but you’ll be fine.”

Weinstein eventually apologized to her for his past actions, but it didn’t occur until her Oscar-winning turn in 12 Years a Slave, her first film. At that point, she promised herself to never work with Weinstein and turned down a role he offered her in an upcoming Weinstein Company film, a meeting she only took because her agent would be with her.

Nyong’o wrote she had no idea that she wasn’t the only person who had been harassed by Weinstein, and she said she was inspired to look back at her own experiences after seeing other women open up about it. Although she didn’t believe that anyone would want to listen to her story or bring justice, she hopes that the tides can change.

“I hope we can form a community where a woman can speak up about abuse and not suffer another abuse by not being believed and instead being ridiculed,” she wrote. “That’s why we don’t speak up—for fear of suffering twice, and for fear of being labeled and characterized by our moment of powerlessness. Though we may have endured powerlessness at the hands of Harvey Weinstein, by speaking up, speaking out and speaking together, we regain that power. And we hopefully ensure that this kind of rampant predatory behavior as an accepted feature of our industry dies here and now.”

You can read the full editorial on the New York Times website.