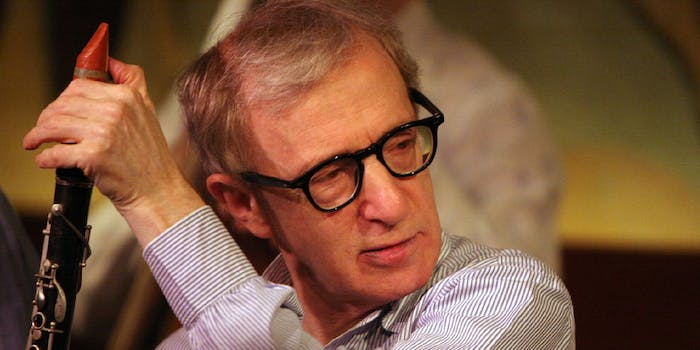 Could Untitled Woody Allen Project be as good as it sounds?

Of all the media famed and controversial director Woody Allen is known for—films, plays, books, jazz—TV had long been conspicuous by its absence. California is so clean, his alter ego in Annie Hall says, because “they don’t throw their garbage away, they make it into television shows.”

Perhaps now that we’re moving beyond the era of Nielsen-grubbing network broadcasts, Allen sees things differently: Fresh off two Golden Globe wins for the groundbreaking Transparent, programming newcomer Amazon announced a deal with the nebbishy auteur to produce a full season of a 30-minute TV episodes. Untitled Woody Allen Project, which we really hope is the official and not working title, will be available “exclusively on Prime Instant Video next year.”

Cast and plot details are more or less nonexistent at the moment, but with Allen’s late work, you pretty much know what you’re going to get, and you just have to pray it’s not set in Europe. “I don’t know how I got into this. I have no ideas and I’m not sure where to begin,” the cinema legend remarked. “My guess is that [Amazon Studios chief] Roy Price will regret this.”

Amazon’s streaming TV service costs $99 for a year subscription, which these days is the equivalent of going to the movies about six and a half times. So choose wisely.