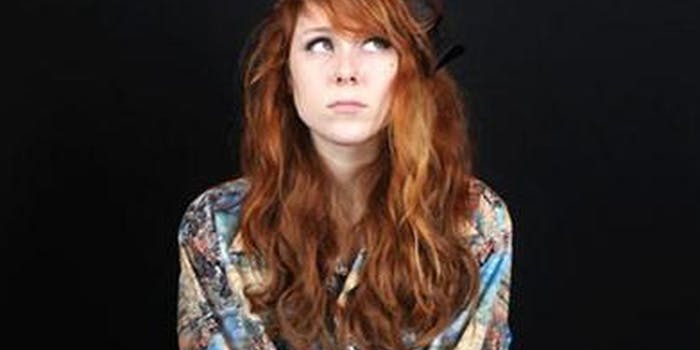 Why Kitty Pryde is more than a Tumblr rapper

The rapper behind the 2012 smash "Okay Cupid" talks Tumblr, trolls, and her place between the two.

Kitty Pryde has just been let out of a magazine photo shoot.

It’s one of many she’s landed since her dreamy debut single, “Okay Cupid,” catapulted her from talking about hip-hop and posting rap videos on Tumblr to making Rolling Stone‘s list of the best songs of 2012.

“It’s just being bossed around, being uncomfortable, looking ways that you don’t want to look,” exclaims the rapper born Kathryn Beckwith, who recently shortened her stage name to avoid further confusion with the X-Men character.

Kitty is getting used to being in the spotlight—in uncomfortable positions. Just check the comments on any of Kitty’s videos, any article about her, or even her own diary on Tumblr. She’s at the center of a confounding debate about privilege, authenticity, and “real” hip-hop in the Internet age.

“People think I represent teenage girls in hip-hop, which I don’t think anybody really wanted in the first place,” she says. “I might not be representing us well. I don’t know.

Kitty has been pegged “Tumblr-wave” and “Tumblr-core.” While she scoffs at both terms for obvious reasons, it’s the most logical box to put her in. Kitty, who turned 20 in February, blogs prolifically—her avatar is a Skrillex animation and her Dashboard theme sparkles with My Little Pony characters—and gave away her new EP, D.A.I.S.Y. Rage on the platform. She even recently launched a fundraiser to help one of her early friends on the site.

Intentionally or not, Kitty’s Tumblr famous. Teenage girls post videos on the site trying to emulate her rap style, and they send her messages asking for advice about everything from relationships to eating disorders.

“At first, I was like ‘Oh god, I should not be the one giving out advice,’ but now it kind of helps me, because for some fucking reason, people look up to me,” Kitty says. “I don’t understand why. But I make better decisions when I know other people are going to be emulating them.”

Kitty’s made a lot of big decisions in the past year. She quit her job at Claire’s at the mall, which she says she still misses. She moved out of her parents’ house in Florida and headed  to Brooklyn, where she now lives most of the time with her boyfriend, Grammy-nominated producer Hot Sugar. And she self-released D.A.I.S.Y. Rage.

The EP hits all of the right SEO points for the Tumblr crowd, with references to Wu-Tang Clan sprinkled in with Twitter trends, YouTube memes, 4chan’s music boards, and stalking boys on the Internet. Her music seems to confuse the hell out of critics and bloggers.

Is she a self-aware artist—cue eye roll from Kitty—who’s in on her own joke? Is she even joking? And is this pale, freckle-faced white girl actually any good at rapping? Nobody seems to have asked the girl at the center of it all.

“I’m not a person,” Kitty says, laughing. “People don’t really consider me a person anymore. I’m the subject. So, it’s whatever.”

Then there’s the other type of attack that plagues Kitty. She’s been accused of sleeping her way to the top with everyone from producer Beautiful Lou (who sent her the beat for “Okay Cupid”) to rapper Riff Raff, who she collaborated with on “Orion’s Belt.” One of the tracks on her latest EP is about the stress-induced rash she gets when someone harasses her—which happens a lot. 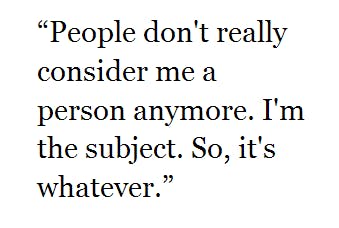 The online trolls are persistent—one girl has apparently been stalking Kitty on the Internet for two years–and the real-life ones can be worse. A girl once harassed Kitty at a show until she broke down crying—on the same night someone threw a full water bottle at her during her set.

“At first I was really freaked out because I didn’t know how stuff worked,” says Kitty.

“I didn’t know that once you start being in the public eye, you don’t get to pick what people think about you anymore. People are going to think whatever they want, and you literally can’t do anything about it. At first I was like ‘No, wait!’ And I would try to clear up rumors and stuff that bothered me, but now I’m like ‘Whatever, dude. You’re an idiot.’”

On “Dead Island,” the first single from D.A.I.S.Y. Rage, Kitty takes the haters in stride, rapping with veteran poise about the weird experience of watching people speculate about her on their blogs.

“You’re unable to discern if I’m the wunderkind or underdog; So fuck it all, I’m the wonderwall,” she raps.

Although she can’t control what people think of her on the Internet, Kitty insists on staying in control of her own career. She’s turned down commercial deal for “Okay Cupid,” major label offers, a tour with 3Oh!3, and an appearance on G4’s Attack of the Show, all in the name of staying true to her personal brand and vision.

“[On D.A.I.S.Y. Rage] I got to do whatever I wanted,” she enthuses. “I made whatever songs I wanted. I could record it wherever and release it wherever I wanted, and if I had taken those deals, I wouldn’t be able to do any of that stuff. And I might not even have been able to write my own songs!”

I ask Kitty if she sees music as a full-time career in the long run.

“At this point, it seems like I’m going to be [rapping],” she casually responds. “It wasn’t necessarily what I planned on doing, but it’s so fun that… why not?”

After her run at South by Southwest this week, Kitty will tour the U.S. with Danny Brown, the rapper she fawned over in her “Okay Cupid” video and later befriended IRL.

“Everybody said that I couldn’t do that, and it was never going to happen, and nobody took me seriously—except for Danny, and a couple of other people,” she says. “And now, I just want everybody to know that it’s real life, bitch! And I am a musician! And I’m an artist! And I’m a rapper! And I can rap good!”