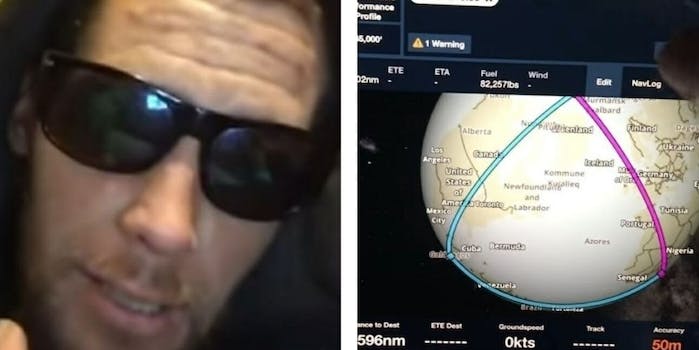 This has gotten out of hand.

One YouTuber says he successfully completed a $100,000 challenge thrown out by a flat-earther—now, he says the flat-earther won’t pay him what he owes.

YouTuber Wolfie6020 said in a vlog posted in late October that a flat-earther named Flat Out Hero (who has about 1,000 subscribers) called him out by name in a video which Flat Out Hero laid out this challenge: Use flight charts to navigate in a plane from a Point A to a Point B and from a Point B to a Point C before returning home, all with the exact same amount of distance flown in between the turns and only using 90 degree turns.

As Flat Out Hero wrote in the caption of his original challenge video from mid-October, “It’s impossible, but don’t tell the globetards that! This is the final nail in the ball earth coffin, and I am happy to be the one to hammer it in!!!”

Wolfie6020 took the challenge and said he completed it. In a video from late October, he showed the flight path he used, which included a three-legged shape (basically a rounded off triangle) with 90-degree turns with each leg consisting of 5,401 nautical miles. Just like what Flat Out Hero was asking.

After Wolfie6020 explained how he accomplished the task, he asked a simple question: “Do you have your money ready?” The answer from Flat Out Hero, so far, is no.

Flat Out Hero responded by saying he hadn’t meant for the word “chart” to be used as a verb but only as a noun, and in another video, he said it was supposed to be charted on a flight chart with no curvature.

Originally, Wolfie6020 used electronic charts to navigate the route, because he said paper flight charts have fallen out of use in the modern day. But after Flat Out Hero balked at the electronic flight chart, Wolfie6020 posted a video showing how it could be done with the outdated technology as well.

Flat Out Hero was accused of moving the goal posts of his challenge multiple times so he wouldn’t have to pay up, which Flat Out Hero denied (one YouTube commenter wrote, “If he moves the post any further they’ll go down beyond the horizon”). At one point, Flat Out Hero, for some reason, also discussed possibly adopting a child. By early November, Flat Out Hero said Wolfie6020 had successfully plotted out the route, but he said he still wasn’t convinced it was flyable.

On Saturday, Flat Out Hero said he might livestream himself giving a “couple bucks” to charity and that he probably wouldn’t be adopting a child after all. So far, nothing has been paid, and at this point, it seems like Flat Out Hero probably won’t. Perhaps the Flat Earther can reach out to Logan Paul for guidance.

But even if Wolfie6020 never gets paid, he’s still the winner in one sense. Before Flat Out Hero released his challenge, Wolfie6020 had about 8,000 subscribers. Now, he’s at about 58,000. You don’t need a flight chart to figure out that, because of this controversy, Wolfie6020 has received a huge subscription bump.