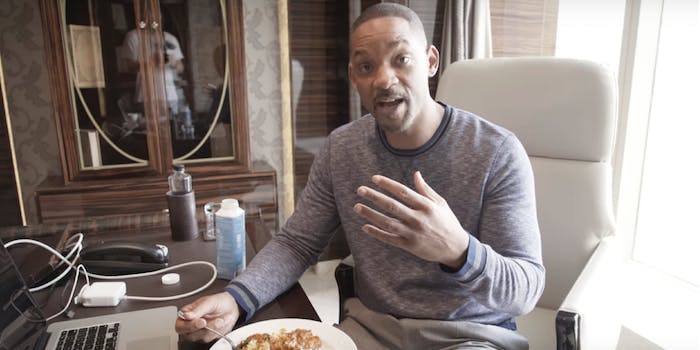 The 'Bright' actor is pivoting to video.

“Practice is controlled failure,” Will Smith says in a vertical video, filmed in a moving car. “Failure actually helps you to recognize the areas where you need to evolve.”

Will Smith has a YouTube channel now. In his most recent vlog, he uses a quote from Christian motivational speaker John C. Maxwell as the foundation for an inspirational minute-and-a-half wisdom-bomb. This is the kind of advice that feels like it should be delivered via an earpiece in a megachurch, but Smith is offering it to his fans for free.

The channel is still young: The first video went live Dec. 19, days before his critically panned Netflix film Bright debuted. Popular YouTuber Lilly Singh featured Smith in her Dec. 23 video “How To Speak Internet 101,” in which he learns to communicate online. His new channel was also hyped in Singh’s video; this is the meta-world of YouTube.

A Netflix ad for Bright played before one of his videos, which is part behind-the-scenes footage of the film’s promotional tour, part exploration of a terrible Arnold Schwarzenegger impression. But still, this is Smith being real and accessible, even if, as the Outline notes, his team seems to be struggling with how to present Will Smith the 49-year-old mega-celeb to the discerning youth of the internet. At the end of one video, he urges viewers to “click subscribe, ’cause I’m gonna be making hot content.” You involuntarily want to say, “Daaaad.”

But perhaps that will work in his favor. The Outline recently published a piece about Smith and other celebs like Dwayne Johnson, who are embracing YouTube later in their fame cycles. Celebrities—especially, perhaps, those with kids—have likely seen the potential of YouTube for direct connection with fans. Want younger people to come to your movies? Tell them directly. But for now, Smith just wants to give you hot content.