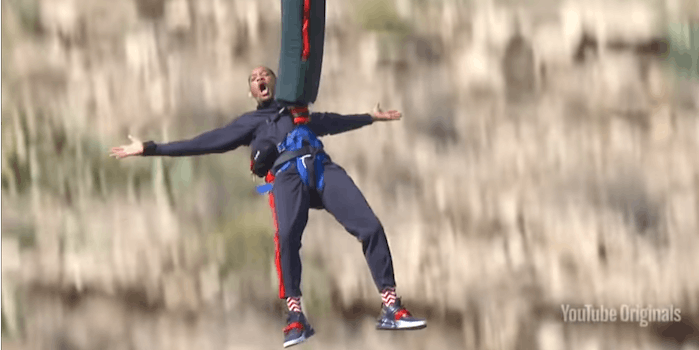 The global icon completed the jump for charity.

Not everyone looks at aging the same way. For some, 50 is commemorated with all-black balloons and heaps of “over the hill” merchandise, and for others a nice dinner with friends is plenty. Not for Will Smith, who spent his 50th birthday leaping from a helicopter situated hundreds of feet in the air near the Grand Canyon in Arizona.

In a video titled “Will Smith: The Jump,” Smith leaped backward from the helicopter, which hovered outside Grand National Park on the Navajo Nation. He soared through the air, arms reached high above his head, for several long moments before hitting the end of the bungee and springing back up, toward the area where his family and friends were gathered to watch.

"There’s a real relationship between freedom & joy, fear actually traps you, my father passed a little over a year ago, and there’s something about the confrontation of death that frees you!" Happy Birthday Will Smith! #WillSmithTheJump pic.twitter.com/X9zAmoglJO

Smith was challenged to the stunt by Yes Theory, a group of four men who “believe that life can be as fulfilling and authentic as you wish so long as you are willing to seek discomfort,” according to their website. The livestream of the jump was hosted by Alfonso Ribeiro, who played alongside Smith in The Fresh Prince of Bel-Air, as Carlton.

Smith was also joined by his wife, Jada Pinkett Smith, and his three children Trey, Jaden, and Willow.

My Squad holding me down for my big 5-0. We’re gonna start live streaming on my YouTube soon, link in bio #willsmiththejump

Smith completed the jump for the charity Global Citizen, according to the BBC. The organization aims to end poverty by the year 2030. The jump will raise money for a project called Education Cannot Wait, which is “dedicated to education in emergencies and protracted crises,” according to their website.