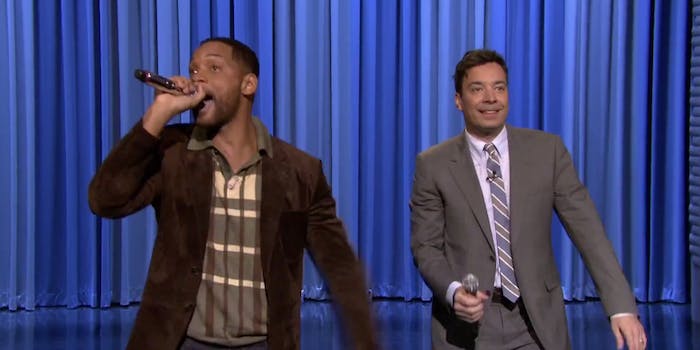 It doesn't take long for everything to fall into place.

There was a noticeable lack of Will Smith in Jimmy Fallon’s spot-on Fresh Prince of Bel-Air opening to start off his week in Los Angeles. Sure, he managed to bring some of the show’s original players back together (and yes, Carlton’s still got it), but the big star of the show was nowhere to be seen. Did he have other obligations, or was he perhaps above the whole “reunion” thing?

Turns out, Fallon had other plans for him.

Instead of playing a small part in a bigger thing, Smith joined Fallon for a separate segment in which they played around with an iPad app that let them layer vocal recordings. That in itself took time and preparation, but once they got everything in place, Will Smith took over the segment.

He might not perform as often anymore, but he’s still got it.