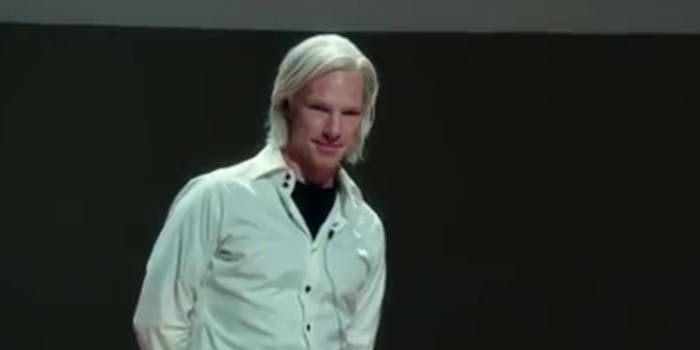 WikiLeaks is not impressed with the new WikiLeaks movie trailer

The trailer for the new WikiLeaks movie, The Fifth Estate, was released yesterday, and WikiLeaks promptly took to Twitter to voice its dissent. Benedict Cumberbatch, he of Sherlock Holmes, Star Trek Into Darkness and otter lookalike fame, plays the role of founder Julian Assange.

The trailer is very Hollywood, with Cumberbatch uttering heroic phrases like “courage is contagious” over swelling strings and explosions. The closing shot flashes the words, “You are the fifth estate.” The film is directed by Bill Condon, who most recently helmed the Twilight: Breaking Dawn series. From the looks of the trailer alone, The Fifth Estate seems pro-WikiLeaks, even if Assange denounced the film as a “massive propaganda attack” earlier this year.

Still, many Americans only know the name WikiLeaks or Julian Assange, not its origins. For all its visual histrionics and dialogue about “truth, justice, the American way,” the film, much like Kathryn Bigelow’s Zero Dark Thirty, is tackling a very contemporary event, so it will be interesting to see how much revision or reinterpretation has happened. It also gives WikiLeaks a sense of historical relevance in this new era of citizen journalism (the “fifth” estate), especially in this summer of whistleblowing.

The movie is out in October. Perhaps by then, Assange and Edward Snowden will be watching this movie from a balcony somewhere, like Statler and Waldorf from The Muppet Show.

Photo via The Fifth Estate/YouTube