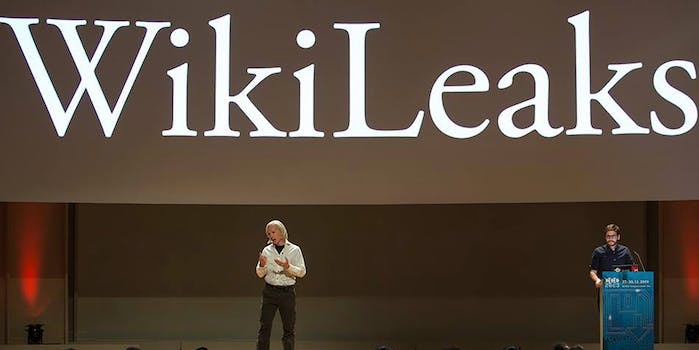 WikiLeaks’ latest leak: The script of the WikiLeaks movie

There’s an old adage that goes like this: When all you have is a hammer, every problem looks like a nail. For the alternately infamous and monumental transparency group WikiLeaks and its alternately charismatic and controversial founder, Julian Assange, its hammer is right there in the organization’s name.

So, when the group came out against The Fifth Estate, a major Hollywood movie about WikiLeaks’ recent exploits, the next move was probably pretty obvious—leak the script.

In a memo accompanying the script’s release that listed a point-by-point analysis of where the movie’s plot supposedly diverged from reality, WikiLeaks called the film “irresponsible, counterproductive and harmful.”

The memo went on to charge that the movie was made with a specific anti-WikiLeaks agenda to portray Assange as an “antisocial megalomaniac” and falsely implied that WikiLeaks’ disclosures harmed over 2,000 United States government informants.

“There are very high stakes involved in how WikiLeaks is perceived. This film does not occur in a historical vacuum, but appears in the context of ongoing efforts to bring a criminal prosecution [emphasis in original] against WikiLeaks and Julian Assange for exposing the activities of the Pentagon and the US State Department,” wrote the group. “People should not in any way treat this film as an historical account of WikiLeaks, its activities or its personnel. Hopefully, they will be inspired to approach the topic with an open mind, and to support WikiLeaks.”

While the film’s director, Academy Award–winning filmmaker Bill Condon, said that the version of the script released to the public was an early draft bearing “little resemblance to the movie we made,” WikiLeaks insists that it is actually a late-stage version nearly identical to one shown that the film’s premiere earlier this month at the Toronto International Film Festival.

Assange, who has been cloistered inside of Ecuador’s London embassy for over a year to avoid extradition to Sweden on sexual assault charges, has long been critical of the film, describing it as a “massive propaganda attack” during a videochat with students from Oxford University in January.

Sherlock Holmes actor (and otter look-alike) Benedict Cumberbatch, who plays Assange in the film, told Entertainment Weekly that he half expects WikiLeaks to come after him for his role.

“I’m not a bank with offshore accounts in the Canaries, I don’t fiddle my taxes, I’m not wanted for war crimes,” said Cumberbatch. “If he goes after me, it’s going to be a waste of his extraordinary talent. But if he does, I kind of respect that because he needs to be able to answer back.”

Cumbertach has said he attempted to reach out to Assange during his preparation for the character but was rebuffed.

Check out this trailer for the film, which is being released in the United States on Oct. 18:

Screencap via The Fifth Estate/Facebook