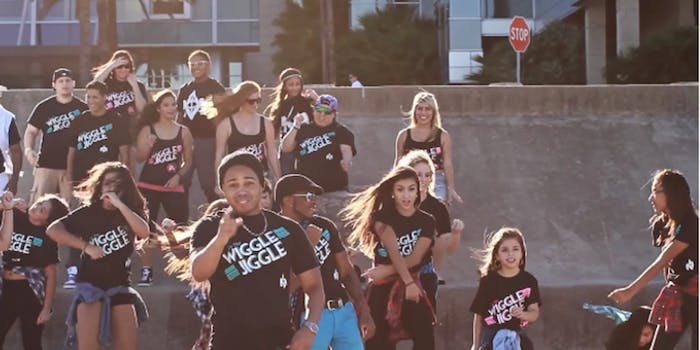 Is the ‘Wiggle Jiggle’ the new ‘Harlem Shake’?

It started in the clubs, now it's on the Internet.

Last year, the “Harlem Shake” was YouTube’s dance phenomenon of choice, one that celebrated the culture of parody more than the actual  moves or history of the dance. Since that fad died out, there hasn’t really been a new dance to take its place. Could it be the “Wiggle Jiggle”?

Silmeon Maldonado and Quinton Campbell, two brothers from Corpus Christi, Texas, are behind the line dance known as the “Wiggle Jiggle,” which has been quite popular in South Texas clubs for the last year or so. Once younger kids started to do the dance, they released an official video last fall.

“It was just something we would just do for fun in the clubs with our friends to random songs,” Maldonado explains. “More and more people started to ask about it, so, being a music producer, that’s when I decided to do an original track to it almost a year ago. We wanted to give it a funny, funky name so that’s when ‘The Wiggle Jiggle’ was born. We started to do the official ‘Wiggle Jiggle’ line dance in the clubs in Corpus shortly after we released the first version of the song last April.”

Of course, once a dance trend starts in the clubs, it doesn’t take long for YouTube to take notice.

“Dance crews from France and Holland have made YouTube videos doing it,” Maldonado said. “People from the Philippines and Dominican Republic have made a YouTube video of them doing it. I’ve been out of town to San Antonio and Austin and have heard a few clubs play the track. … People who have friends from other states have heard it played where they were at and recently more and more people are hearing about it. It’s been played on quite a few radio stations, which is unheard of for it to not be backed by a label.”

He says celebrities like DJ Steve Aoki and Danny Green of the San Antonio Spurs have given the dance a bump by performing it on YouTube, and now even newscasters from Corpus Christi stations have attempted the dance. Will the “Wiggle Jiggle” go viral in 2014, or will it be rediscovered decades from now, much like the “Harlem Shake,” and parodied by a new generation? Maldonado thinks the time is now for us to “Wiggle Jiggle” as one.

“Line dances never die so with the attention it’s getting now I’m sure it can grow into the next YouTube phenom within a few months and be one of the line dances for the books!”