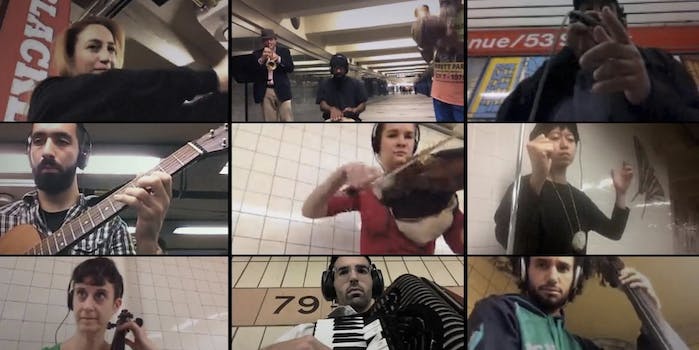 The subway musician is ubiquitous in New York City, and it’s often a solo endeavor. But what if those standalone musicians across the city were united in an unseen orchestra? Thanks to a pair of ambitious filmmakers and the implementation of Wi-Fi along subway platforms, that’s exactly what happened one afternoon.

Producer Anita Anthonj and director Chris Shimojima found performers willing to work together with the help of a Wi-Fi connection directly to composer Ljova, who led them in a performance of “Signal Strength,” an original piece of work. Ljova worked above ground in Bryant Park, conducting at laptops that connected with individual performers in real time at nine separate subway stops. The resulting piece combines diverse instruments like accordion, theremin, cello, and djembe into a magnificent experiment in art and collaboration.

The next time you’re on a subway platform and see a solo musician, they might just be a part of a much larger musical moment.