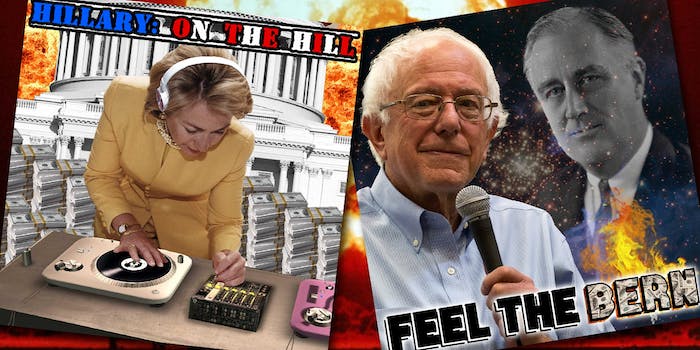 Who has a better mixtape of supporters: Hillary Clinton or Bernie Sanders?

Let's dispel with this fiction that Ja Rule doesn't know what he's doing.

On the verge of the delegate-rich Super Tuesday, the Democratic challengers are jostling for any kind of an edge. And while Hillary Clinton is sitting pretty having just won South Carolina in a landslide, Bernie Sanders can at least match resources when it comes to musician support.

Perhaps unsurprisingly, the far-left candidate Sanders enjoys a menacing mixtape of support from trending indie musicians. For her part, Clinton can lean on a monolithic battering ram of legends and headliners.

While scattered strummers—Ted Nugent, Loretta Lynn—are stumping for the GOP, the Democrats in 2016 are retaining a super-majority of rock stars. The question, then, becomes which presidential short-lister can point to a better Spotify playlist composed of supporters? We’ll leave the subjective analytics to your earbuds.

(Note: In instances where members of bands have publicly endorsed candidates—Foo Fighters and Slipknot, for instance—we’re counting their corresponding act unless other members of the band have offered dissenting public opinions.)

Feel the Bern: The Prequel