It's a question for the ages.

If you’re a fan of R&B musician Frank Ocean, you know what it’s like to be in pain.

Ocean’s critical breakthrough, 2012’s brilliant Channel Orange, chronicled his own heartbreak and struggles with relationships, crack homes, religion, “Super Rich Kids,” and his own sexuality. Fans have been desperately waiting for something to chase the pain with ever since.

The New York Times reported that the widely anticipated release of his follow-up, Boys Don’t Cry, would happen Aug. 5, but Friday came and went, with thousands of fans hopelessly refreshing the Apple Music store.

Ocean’s fans relayed their disappointment over the weekend on social media, but many weren’t surprised. The same thing has happened to them before. In fact, Ocean originally promised on Tumblr that the album would arrive in July 2015 with an accompanying magazine.

Frank Ocean on tumblr: “I got two versions. I got twooo versions…” and #JULY2015 pic.twitter.com/EPdFCJDqZa

Which means the Frank Ocean waiting game has been more than a year in the making.

The man behind Frank Oceans Album, a Twitter parody account with over 20,000 followers, said he’s not sure if he can take the wait anymore.

“I’m very hurt and sad. I just want it to be out already. When it drops I’m going to hate it because of how long he took to drop it…He keeps playing with my emotions,” wrote Domonic Dominguez, the 21-year-old music producer who runs the account, in a direct message to the Daily Dot.

So when will the new Frank Ocean album finally drop? Some speculate it may be November. Ocean posted an image of a library card last month on the website for Boys Don’t Cry. A popular fan theory on Reddit is that the many due dates on the library card are the dates that the album was “due” or expected to drop, but pushed back for some reason. The first date on the card—crossed out in black ink—is the originally floated release date of July 2015. The most recent date on the library card is Nov. 13, 2016, which some speculate will the new album’s actual release.

Here is the library card below, which was posted on July 2: 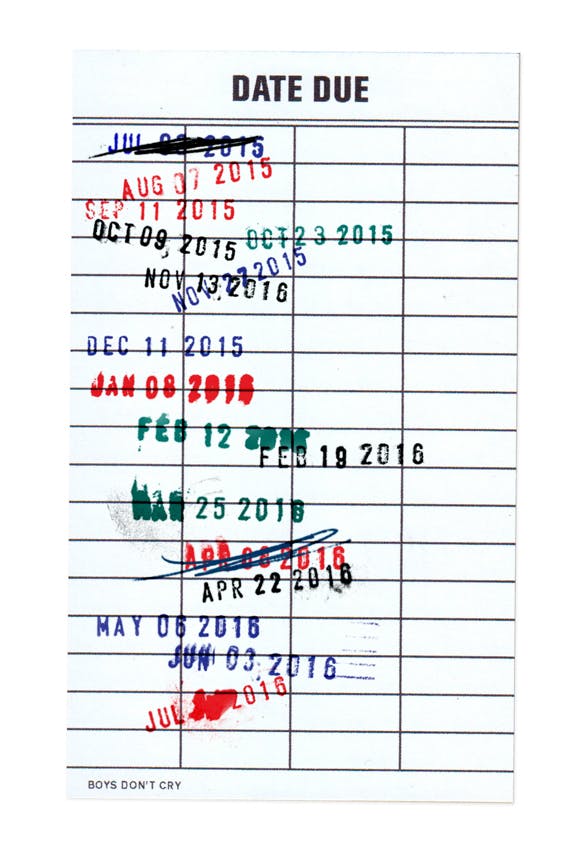 “He didn’t turn it in on time, it’s overdue, he’s racking up late fees. Not sure about the Nov date, seems as plausible as anything at this point but he could drop it anytime and it would still fit with the theme of the library card. Basically the library card doesn’t mean shit when the caption is ‘overdue’.”

Other fans are currently fixated on a livestream sponsored by Apple Music that appeared on Ocean’s site last week.

The livestream shows an empty room; at some points last week Ocean appeared at a workbench. One fan even created Frank Mocean, a motion detector-enabled Twitter account that will tweet if it senses any activity on the video feed.

If you see this it means I'm up and running. Next tweet when Frank Moceans.

The exclusive release of Boys Don’t Cry on Apple Music gives Ocean more flexibility with deadlines than a traditional CD release. As the New York Times explains, digital releases have a turn-around time of less than a week, allowing artists to make last-minute changes, as was the case with Kanye West and The Life of Pablo. Ocean, like West, is known for perfectionist tendencies that no doubt contributed to the album delay.

Ocean’s album delaying antics may no longer be the exception to the rule. Rules for how artists can release, promote, and monetize their work are being rewritten in 2016. Streaming platforms such as Apple Music and Tidal allow artists to drop unfinished tracks or entire albums by surprise, as we saw with Beyoncé‘s Lemonade.

The ability to self-promote and even self-distribute on social media has given artists a type of agency over record labels they didn’t have in the past.

“It’s already been taking place; it’s nothing new. Beyoncé set the tone for something that was done mainly on the underground,” said Tony Neal, the CEO of The Core DJs in a direct message. “Artists who didn’t have the big budgets but had great social media numbers put out their music on digital outlets like Tunecore and did their own promotion. If you already have a fan base and the freedom to release music, I think it should be done more often.”

While album delays frustrate some fans, they also increase interest. Ocean’s delayed album drop on Friday tripled both his Wikipedia page views and Facebook mentions, and resulted in half a million Google searches, as Fortune noted.

Digital releases come without the manufacturing costs of a finished album. This means artists can stoke the fire and release “beta” versions of their work—a stroke of genius West employed for The Life of Pablo. Sometimes there doesn’t even have to be a finished album.

“The actual album is but a piece. If anything, we’re past where the backlash is warranted,” a former senior vice president at Warner Bros Records, who wished to remain anonymous, told the Daily Dot. “This is the new reality of the music business: It’s software.”

What does that mean for Frank Ocean fans? All they can do is wait….and wait…and wait.

Update Aug. 15, 8:21am: Shahzeb Khan, an engineering student at the University of California, Davis, has created a free app that will text you a purchase link to Frank Ocean’s new album. It’s called (650)82OCEAN, and it monitors Spotify, iTunes, and Twitter to determine when the record has finally been released.

Update Aug. 19, 11:18am: Ocean released a new album, Endless, late Thursday night via Apple Music. The 18-track visual work is not the same as the long-awaited Boys Don’t Cry, which is reportedly dropping this weekend, albeit with a new name.