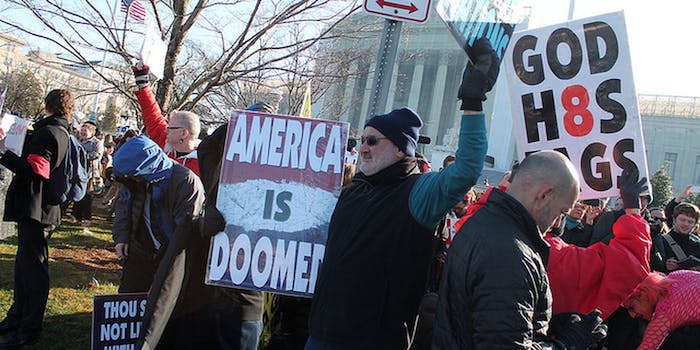 Westboro Baptist Church has a SoundCloud, and it’s as awful as you think

There are original songs, but originality isn’t really where WBC excels.

Just like the Devil, the Westboro Baptist Church is good at tricking people. They’ve somehow turned their manufactured hate machine into an Internet punchline, and made a name for themselves by protesting bands and concerts that fit whatever agenda they happen to have that week. Mining outrage never gets old, does it?

Most recently, they protested Sunday’s Panic! at the Disco show in Kansas City, Mo., after releasing a song called “You Love Sin What a Tragedy,” a clumsy parody of Panic’s song “I Write Sins Not Tragedies.” In response, the band turned the protest into a charity drive for the Human Rights Campaign, but WBC continued their social media surge.

We’ve documented WBC’s Vine presence, but they also have a SoundCloud page, where you can explore all the songs from their oeuvre. And what a collection it is.

There are originals, like “Why Did God Destroy Sodom,” but originality isn’t really where WBC excels.

In a week where Weird Al has proven himself a master of parody, WBC is certainly giving him a run for his money. They have 139 parodies posted to SoundCloud, like “Nuthin’ but a Bible Thang,” their take on Dr. Dre and Snoop Dogg’s “Nuthin’ but a ‘G’ Thang.”

And, of course, they tackled “Let It Go.” This is bordering on Weird SoundCloud territory.

And who could forget their spirited cover of “I Will Always Love You,” tweaked to let you know how God really feels about you.

Same with this “We Are the World” cover.

This “Big Pimpin’” cover is so bad you’ll wonder if there is a God!

Is it possible to make a Carpenters song sound bad? Yep!

Don’t forget: WBC keeps it topical. They covered Fleetwood Mac’s “Landslide” after a March landslide in Washington state killed some 40 people. “Thank God for this righteous judgment,” they wrote on SoundCloud. “Now. Is it time to repent of your same-sex marriage sin, Washington? Yes.”

They also recently weighed in on the Malaysia Airlines crash. Perhaps they should package all these songs into some sort of Now That’s What I Call Music!–style compilation. Now That’s What I Call Tasteless Exploitation of Tragedy and Opportunistic Manufacturing of Hatred, in Accordance With God’s Teachings!, perhaps? Too wordy?