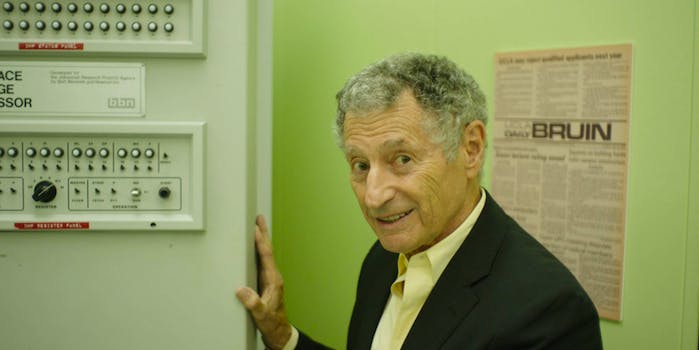 With ‘Lo and Behold,’ Werner Herzog questions the internet

Humanity created the internet. Now it must tame it.

In the first five minutes of Lo and Behold: Reveries of the Connected World, Werner Herzog sets the tone with a voiceover: He visits the birthplace of the internet, and while panning down the halls of a building at UCLA, purrs, “The corridors here look repulsive.”

Lo and Behold is a typically Herzogian look at natural order, only this time his focus is on the web. In that first segment at UCLA, Herzog meets Dr. Leonard Kleinrock, a computer science professor who introduces him to the yellowed monolith that transmitted the first message on the internet (via ARPANET) in 1969. The machine is “so ugly on the inside,” Kleinrock says, that “it is beautiful.” One must envision Herzog nodding intently when he heard that one.

Herzog’s films often explore the chaos and dark beauty of the natural world (Grizzly Man, Cave of Forgotten Dreams, Fitzcarraldo), but as the Daily Dot’s Aaron Sankin pointed out earlier this year, his films are also a bridge to the digital world. This clip from the 1982 documentary Burden of Dreams, about the making of Fitzcarraldo, finds Herzog sizing up the jungle. Or is he predicting the internet in 2016?

The film, out Friday in theaters and on iTunes and Amazon Video, is divided into chapters that tackle internet access, privacy, and technology. In one particularly chilling interview, Christos Catsouras recounts how internet trolls emailed him photos of his daughter’s near-decapitation after a horrific car accident. We’re not told why this happened to the family, or who their daughter was beyond her first name. Herzog knows we can Google her and see the thousands of cached results that still exist. We just see a somber family, framed by plates of muffins, as the girl’s mother claims the internet is “the spirit of evil.”

Lo and Behold is a typically Herzogian look at natural order, only this time his focus is on the web.

Herzog also visits reSTART, a center for internet addiction, and the town of Green Bank, West Virginia, which has become a modern-day refuge for people who are sickened by cellphone signals. Herzog questions who would be morally responsible for the crash of a self-driving car and asks a researcher who is demoing a robot if he loves said robot. All of his subjects are interesting, but the doc skips around so much in 90 minutes to address all these issues that we never really get a sense of who these people are. In that way, Herzog illustrates just how vast the internet is.

The one section he does spend some time on is hacking, speaking with renowned hacker Kevin Mitnick, who points out that for all our safeguards, “people are the weakest link in security.” Herzog is good at lingering on his subjects, and in one of the film’s best moments of dark humor, SpaceX founder Elon Musk tells Herzog, after a long pause, that he can only remember his nightmares, not his good dreams. (Herzog also heartily volunteers for a one-way ticket to Mars, which would make a great follow-up doc.)

Still, Herzog is telling this story from a remove. The filmmaker isn’t on social media; he’s reached a point where parody Herzog accounts and impressions precede him, and his lack of knowledge about Pokémon Go is held as ecstatic truth about the very nature of reality. Perhaps that remove is needed here. Lo and Behold asks more questions than it answers, but that’s always been Herzog’s style.

We’re still in the early days of internet history, and Herzog’s film serves as a document of a time in which ideas are still being forged about how to tame this ever-growing beast. This quote from cosmologist Lawrence Krauss might sum up our place in this relatively new history: “If the internet shuts down, people will not remember how they used to live before that.”