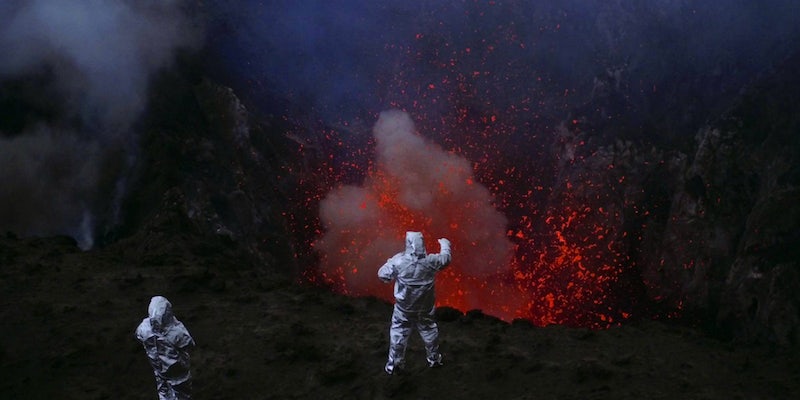 Herzog documents the ‘monumentally indifferent’ volcano with ‘Into the Inferno’

Volcanoes and the people who love them.

Back in 1977, Werner Herzog and his film crew trickled into the island of Guadeloupe to document a nearly abandoned town—and the volcano that loomed above it. A few residents stayed behind to wait it out, or wait for death.

Death and inevitable disaster have long been favorites of Herzog’s. La Soufrière was his first dance, and 40 years later he returns with Into the Inferno, which takes a deeper look at the mythology around volcanoes. He also returns, in part, to the yung-gul that informed his early work.

His last doc, Lo and Behold, was an on-brand look at the dark, combustible landscape of the web, but Inferno proves Herzog is best when exploring natural causes: Cave of Forgotten Dreams, Grizzly Man, Encounters at the End of the World.

Herzog met volcanologist Clive Oppenheimer during the filming of Encounters, and you see their meet-cute in the film. Together they document six volcanoes around the world, visiting the Icelandic town of Heimaey and witnessing a ritual in Indonesia that pays homage to a volcano monster. Herzog documents a man who talks to volcanoes. In North Korea, students gather to sing to a volcano; political history and propaganda are tied into the historic site of Mt. Paektu.

This is fascinating and you want to know more, but Herzog’s lens trails off and we get a look at something else. This happens quite a bit in the film, as Herzog happens upon a person or image that catches his eye. That’s balanced out by awesome footage of roiling eruptions, otherworldly lava flows, and insignificant humans standing on the edge of death. We also want to know more about Katia and Maurice Krafft, who filmed themselves standing on the edge of death, and whose footage Herzog uses artfully.

As enchanting as the images are, Inferno is most engaging when it’s focused on the cultural myths that inhabit volcanoes, and the cultures that live reverently with these simmering beasts. As Herzog explains in the film’s final summation, volcanoes are “monumentally indifferent” to us. The perfect subject.