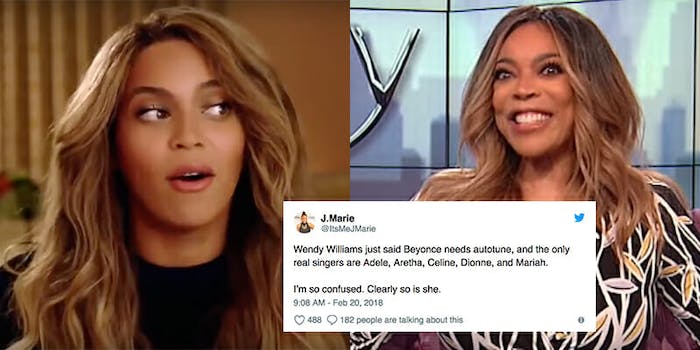 Plenty of people had negative things to say about Fergie’s NBA All-Star “jazzy” rendition of the national anthem. Talk show host Wendy Williams was no exception—but while she was criticizing Fergie, she took the opportunity to drag other artists she said need Aut0-Tune to sound good for a live audience.

On the Wendy Williams Show Tuesday morning, Williams said Beyoncé is one of many artists who “need” Auto-Tune, inducing the wrath of fans on Twitter.

Following her comment, the Beyhive went off on the talk show host.

Wendy said what about Beyoncé ?? pic.twitter.com/MKNijay2mh

I’m so confused. Clearly so is she.

“I love this country and honestly tried my best,” the singer said.

Despite suggesting the need for Auto-Tune, Williams defended Fergie and said the apologetic statement wasn’t necessary.

“I don’t feel like Fergie needed to apologize to anybody. You did it, you done it, and that’s that,” Williams said. “She did her jazzy version of the anthem at the NBA and everyone was upset and she released a statement saying she wanted to do something different—and apparently different wasn’t good.”