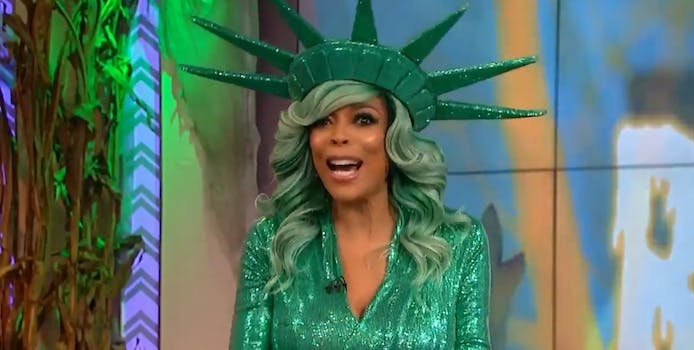 The veteran TV host went down hard, but somehow finished.

Wendy Williams passed out live on the air on Tuesday. The abrupt fall startled her studio audience, but the veteran TV and radio star returned to form following the commercial break and resumed hosting.

Williams said she had been overheated, which was a result of her seemingly heavy Statue of Liberty costume. Before passing out, she slurred her speech and began shaking after returning from a Wendy Williams Show commercial break: “How you doing. Halloween costume contest—we do it every year. It’s always a lot of fun, let’s get started. Our first caress [sic]…”

Wendy Williams just passed out on live TV. And then rallied like a friggin champ minutes later. https://t.co/uN66NEAwR4 pic.twitter.com/L5uMsRMpN0

But the host was able to finish the show without further hindrance following an abrupt commercial break:

The moment immediately began trending on Twitter in the United States, peaking at No. 2.

Wendy Williams fainting while dressed as the Statue of Liberty is the perfect metaphor for 2017.

Williams’ publicist told the Associated Press that since the show’s taping she’s feeling better, and that she’ll address the incident on tomorrow’s telecast.