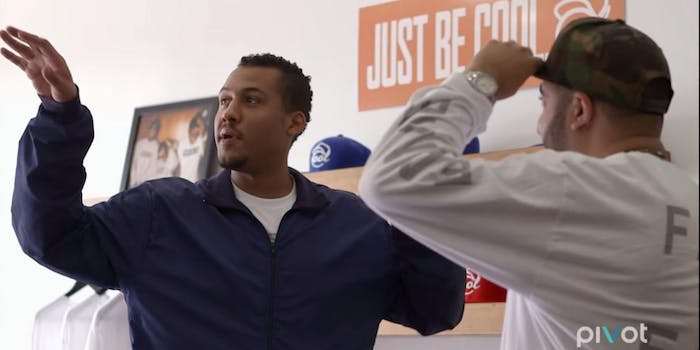 Pivot's newest webseries is unfortunately and inexplicably stuck in the past.

Welcome to Fairfax, a new series following the lives of creative entrepreneurs that premieres at 10pm on Pivot TV, harks back to a simpler time when you didn’t need to know how to code to make ca$h. The problem is, those times are gone, but nobody told the show’s stars.

Do you remember “apparel”? It’s what entrepreneurs used to make before apps. They’d get a few designs together, collect some plain T-shirts, put them on skaters or rappers, and away they’d go. If they were lucky, kids would line up for them, and everyone would hope that they had managed to navigate that narrow and impossible-to-sustain channel where popularity doesn’t cannibalize legitimacy.

Of course you remember this. It was only about five years ago. But then, seemingly overnight, everyone had that beer drinking app and people began queuing for phones. Selling snapbacks and bow-ties out of old shipping containers didn’t look like a smart business model when more technically minded teenagers were suddenly starting to sell out for squillions. How many screen-printed T-shirts would you have to move to make that kind of money?

But Welcome to Fairfax is refreshing. Hearing about tech success gets tiring: The creative process is rarely exciting to the layman, and its inherent link to functionality means that it will always struggle to be cool. Contrast this with Los Angeles’ Fairfax Avenue, which we are told is the Rodeo Drive of streetwear, the Mecca of swag.

It’s a spot that understands cool and the need to protect and contain something that to outsiders might seem desperately arbitrary. It’s a hub for young fashion designers, artists, skateboarders, and musicians. It’s ground zero for Diamond Supply Co., The Hundreds, Crooks & Castles, and Tyler, the Creator. And as we are told repeatedly, like anywhere worth going or anything worth doing, it’s really hard to break into.

“This is the Do It Yourself era—I’m designing the clothes, selling them, marketing, and promoting,” says Gavin a.k.a. Mizzle, the owner of the store YOUth.

“I remind myself that this is hard, but it’s not impossible. I’m not going to stop,” says Tori, who works in a store on Fairfax.

They’re the sort of sound bites you’d expect from people raised on The Apprentice and 50 Cent—fighting words from people who just want to get ahead. But what is there behind this talk? Depressingly, there isn’t a whole lot; especially when it comes to the aforementioned “hustle.” Julian’s grandmother looks on with disappointment as he outlines a bare-as-bones day—studio session later, then meet up with guys—that runs counter to his mom’s insistence that it’s “business first, rapping second.” His bleating about a fellow member’s decision to go out “making money” touring with Kreayshawn smacks of jealousy. He spins his annoyance as being somehow connected to his creative control of the group, but instead it just highlights his laziness or inability to pivot the situation to his advantage.

The others aren’t a lot better. While Tori seems too preoccupied to get anything done—“trying to figure out [her] dreams”—at least Gavin’s heart is in the right place. He’s peddling an acceptable line in social activism. But his designs are so glib (“Just Be Cool”) and his demeanor so bland that his storyline concentrates on his relationship with his father, a former NFL star who is now suffering from dementia. Sad indeed, but an unlikely vibe with which to get viewers frothing at the mouth for one of his “Stop Hating” T-shirts.

At least Gabe Brooks, a street BMX rider fresh out of the joint, has an engaging reluctance to buy into this mantra of positive thoughts and words. When asked whether he planned to keep “his nose clean,” he pauses and, disinterested, replies, “Um… I think that would be a dope thing.”

There’s a real awareness that these guys are on the outside looking in, and at the moment there is a reason for that. None are really artists. They are entrepreneurs with unoriginal dreams trying to latch onto something, anything, that is current—and hopefully lucrative. But while the scene is far from dead, and there will always be room for fresh creative minds, there’s a real feeling that the big show has moved on. The age of the entrepreneur is well and truly active, but it doesn’t have a physical shopfront.