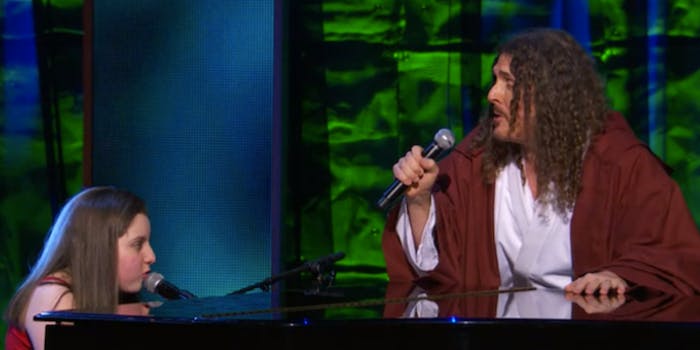 What were you doing when you were 13?

Last night, Jon Stewart hosted Night of Too Many Stars, an autism charity and awareness event. It had everything: Maya Rudolph dry-humping a man who appeared to be in his 90s, Paul Rudd being fed like a baby bird, and Chris Rock shilling for Tommy Hilfiger. But the “Weird Al” Yankovic performance might have been the most touching of the night.

His song “Yoda,” a parody of the Kinks’ “Lola,” was originally released in 1985. Thirteen-year-old Jodi DiPiazza, a musician with autism, wasn’t even alive then, but that didn’t stop her from nailing a duet with Yankovic.

DiPiazza is a musical prodigy, and she performed “Firework” with Katy Perry at 2012’s Night of Too Many Stars. She returned last night to accompany Yankovic—who was dressed as a Jedi, of course—on piano.

The Actionplay Chorus, a group of kids with autism, joined them for the big finale. In a night filled with comedians’ bits and schticks, it was a moving reminder of who should really be in the spotlight.