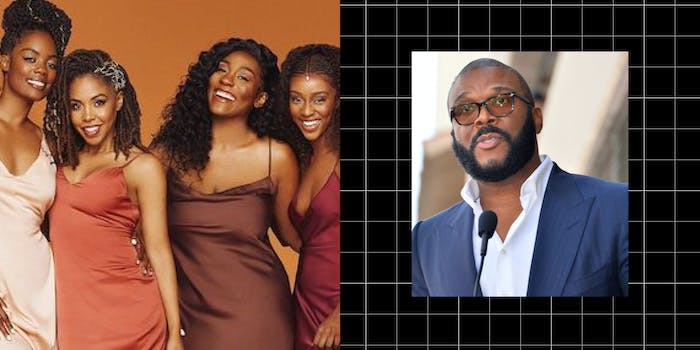 We watched every Tyler Perry show on Sling (and you should, too)

Dive into the world of Tyler Perry.

Tyler Perry is in his fourth decade creating art that delights audiences across the world. Drawing deeply from Black southern culture, church life, and the universal joyous chaos of family, Perry has built a media empire. If you’ve always been curious about Madea or wanted to meet the Browns, there’s no better place to dip a toe in than Sling TV. To help you get started we sat down and watched all the Tyler Perry shows and movies available to stream on Sling. It’s a world of humor, drama, romance, and family; but it’s a big world. Let us guide your journey into the world of Tyler Perry.

Why do people love Tyler Perry?

It might seem strange to pose the question of Tyler Perry as a brand more than a person, but to a degree that’s true. To fully appreciate and love Tyler Perry is to love every angle of his gloriously over-the-top empire. Your average pop culture consumer may think Perry is just a guy who makes those Madea movies. But his storytelling vision spans stages and screens, sometimes at once.

Perry’s incredible blend of melodrama, comedy, moral lessons, and bawdy humor all tie back to his early career in theater. The writer/actor/director spent his twenties crafting stage plays, learning how to tell compelling and addictive stories that literally brought in crowds. Between 1998 and 2005, it was reported his plays had sold $100 million in tickets.

When he set out to conquer Hollywood with the indie classic Diary of a Mad Black Woman, Perry used ticket sales from his stage plays to get the production started. While critics at the time didn’t understand what Perry was going for, having little exposure to Southern touring religious melodrama on the coasts, audiences flocked.

But Perry still wasn’t done. Having conquered indie cinema and playhouses across America, he set his eyes on TV. Starting with Tyler Perry’s House of Payne in 2006, the auteur has helped produce 16 shows. In fact, there hasn’t been a year without a Tyler Perry-produced TV show airing since 2006.

Whether you want to start exploring Tyler Perry’s web of TV shows or catch up on his films, Sling TV can open the door. We’ve watched every Tyler Perry-related show on Sling TV to help you discover your new Tyler Perry obsession.

Of all the shows created by Tyler Perry, Sistas feels the most like the culmination of years spent blending comedy and drama. Sistas follows four single Black women working to have it all between love, career, and living their lives.

Each woman – a divorce lawyer, salon owner, bank teller, and airport employee – live different lives. But the bonds of friendship hold them even as the tragedies and complications of adulthood catch up. Side-splittingly funny, and heart-tuggingly intimate, Sistas is a cable dramedy triumph. You can see the first four seasons of Sistas right now on Sling.

On the opposite side of the Tyler Perry universe is The Oval, a pure and joyous celebration of over-the-top melodramatic thunder. Tyler Perry has understood the addictive power of juicy drama since his first stage play. The Oval is his masterpiece, a show about a power-hungry marriage between the interracial President and First Lady of the United States.

Part Scandal, part Why Did I Get Married, The Oval will leave you gasping, laughing, and shouting “what?” at your TV screen. Each season the staff of the White House finds themselves pulled deeper into a web of sex, paranoia, and conspiracy. Check your brain at the door and discover all three seasons of this BET original.

Once you’ve bathed in the wild rapid waters of The Oval, swim into the ocean of how out there Tyler Perry’s shows can get with Ruthless. This spin-off of The Oval centers on a woman who joined a psychotic sex cult, only to become trapped as she tries to save her daughter. Normal Tyler Perry shows can sometimes be dark, but Ruthless lives up to its name.

This show comes with a hard trigger warning for sexual assault, even if it is largely off-screen. That’s great because when it isn’t going overboard with darkness, Ruthless is a compelling conspiracy show that isn’t afraid to tackle some big ideas. Even better, incredible performances elevate the occasionally campy material into a highly bingeable experience.

For 11 seasons, Tyler Perry’s House of Payne has left audiences howling with laughter along with the multi-generational Paynes of Atlanta. House of Payne is a triumph of sitcom writing; juggling long-running serialized stories with lightning-fast jokes. You can pick up any episode and laugh yourself silly. But long-time viewers get to see plots have lasting consequences for our heroes.

House of Payne also isn’t afraid to explore topics other sitcoms don’t. Drawing from the moralistic melodrama of Perry’s earlier work, the show doesn’t shy away from conversations about family or substance abuse. But this isn’t Euphoria. It’s just a great sitcom with an incredibly real heart. It’s also the longest airing show in history with a predominantly African American cast.

You’ll notice by now that Tyler Perry is a world builder when it comes to drama. You might be surprised to learn the same is true for his sitcoms. But Meet the Browns might be his biggest spin-off yet. Before the show, there was a stage play and movie under the same name and the characters appearing in House of Payne. You can tell he really wanted to make this show.

Meet the Browns is similar to House of Payne, but with a significantly stricter focus on traditional big sitcom humor. It centers around Leroy S. Bown, widower and church deacon whose grown daughter Cora moves back in with him after her husband passes. As the duo learns to heal and coexist, audiences get a nonstop stream of slapstick and family-friendly gags. Catch episodes from seasons three and four on Sling.

Assisted Living is the second spin-off of House of Payne, or the first spin-off from Meet the Browns, depending on how you view the Tyler Perry metaverse. The show follows Jeremy, a young man who moves back to Georgia to help his grandfather Vinny run a retirement home. His adventure takes on new levels of silliness when he realizes the retirement home’s investors are Mr. Brown and Cora from Meet the Browns.

Assisted Living is easily the silliest sitcom Tyler Perry has helped make. The retirement home is a rundown mess, but its inhabitants are full of life and the jokes come a thousand miles a minute. Occasionally it will pull at your heartstrings, but if you’re looking for a full-on giggle-fest Assisted Living will take care of you.

Every month new Tyler Perry titles are added to Sling to stream on-demand. However, if you can’t wait, Sling TV’s remains one of the best video stores for streaming TV. You can rent a host of Tyler Perry titles directly from the Sling TV app.

Dive into the Madea-verse with classics like Madea Goes to Jail, Madea’s Big Happy Family, or Madea’s Witness Protection. Or try his original stand-alone films like Tyler Perry’s Single Mom’s Club, Meet the Browns, Why Did I Get Married, and Good Deeds.

However, we suggest renting the wildcard in the Tyler Perry filmography, Acrimony. This is an R-rated psychological thriller change of pace for the normally family-friendly auteur. Taraji P. Henson stars as Melinda Gayle, a jaded wife with a nightmarish plan for revenge.

You can rent these titles, as well as stream a host of amazing Tyler Perry content live every day on Sling TV. Are you ready to be entertained? Join Sling today.