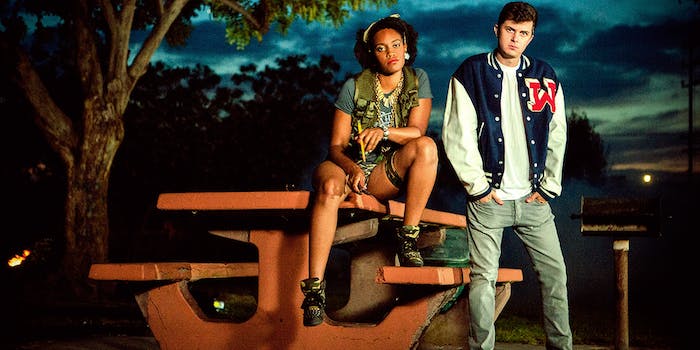 "Kill a Hipster" is Watsky's “Thrift Shop.” It's got the timeliness, the anthemic value, the beat, and—ironically—the mainstream appeal.

In his new video, YouTube rap superstar Watsky laments gentrification, comparing hipsters to zombies and belting a raucous chorus of “Kill a hipster and save your hood!”

“Kill a Hipster” is Watsky’s “Thrift Shop.” It’s got the timeliness, the anthemic value, the beat, and—ironically—the mainstream appeal.

Watsky codirected the video with his longtime collaborator Jackson Adams, who also appears in the video as a taco-truck-loving zombie.

Though the rapper has scores of devoted fans, sold out New York City’s Irving Plaza last year, and tours all over the world, and reached #1 on the iTunes hip-hop charts for his album “Cardboard Castles,” he’s yet to break through in a (hate to say it) Macklemore fashion. And Watsky (first name George) needs it. He’s doing amazingly well for a YouTube rapper, but the man’s been doing spoken-word poetry since he was a teenager, appearing on HBO’s Def Poetry when he was in high school. He’s a talented guy who works hard and deserves to be all over the radio until he gets annoying and your parents are incorrectly singing his lyrics to seem cool.

“Kill a Hipster” could turn that corner for the YouTuber, who broke out with the viral, Ellen DeGeneres-endorsed “Pale Kid Raps Fast.” The video currently has more than 24 million views. Watsky also collaborates with the madly popular channel Epic Rap Battles of History.

On Oct. 4, Watsky kicks off another 35-city tour, called “Hug a Hater,” which will span across the U.S. and Europe. Honestly, the video deserves to be everywhere. But, you know, don’t actually murder any hipsters.