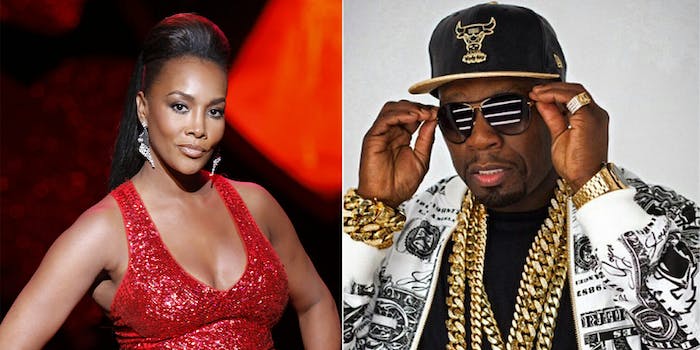 Vivica A. Fox tells all about her sex life with 50 Cent—and he’s not taking it well

'smh who does this?'

Rapper 50 Cent did not wake up in a good mood this morning thanks to a certain headline from the New York Daily News sharing the news that his ex-girlfriend from over a decade ago plans to tell-all about their sex life—or lack thereof—in a new book.

50 Cent dated Vivica A. Fox back in 2003 and the two have made it clear over the years that it did not end amicably, with the ex-couple occasionally having beef online. It looks like it’s now all coming to a head as Fox prepares to launch a self-help book, Everyday, I’m Hustling, in which she says her sex life with 50 Cent was “tame” and “PG-13” because he was more concerned with his career than their relationship.

“Most of the time, I would be the one initiating sex, because I really enjoyed making love with him,” Fox says in the book, according to the New York Daily News.

The 42-year-old rapper did not take kindly to seeing his name in the news when he woke up Monday morning and shared his annoyance about it with his Instagram followers.

Fox reportedly also wrote that she never intended to write about 50 Cent in her book but felt she had to after he allegedly spread rumors about her repeatedly. She’s probably referring to the NSFW rumor 50 Cent spread in 2016 about their sex life in retaliation to a comment she made that she thought he might be gay.