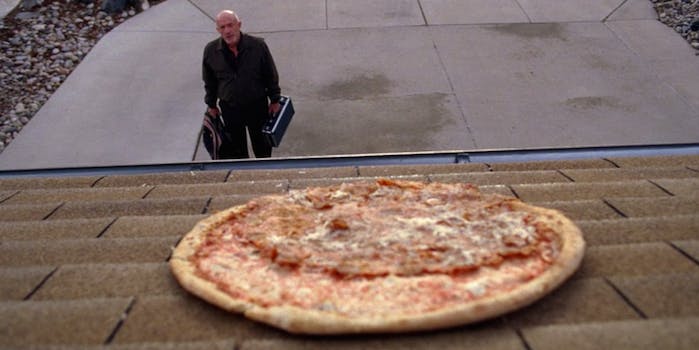 Vince Gilligan has a stern message for the tourists.

Breaking Bad and Better Call Saul creator Vince Gilligan has a stern message for the fans who’ve been visiting Walter White’s old home and throwing pizzas on the roof.

Gilligan stopped by the Better Call Saul Insider Podcast, AMC’s official look behind the scenes of the Breaking Bad prequel, to discuss the latest episode. Before he, cocreator Peter Gould, Jonathan Banks, writer Gordon Smith, and assistant editor Chris McCaleb broke down “Five-O” with editor Kelley Dixon, Gilligan wanted to take some time to discuss the house that the show used for Walter White’s home in Albuquerque, N.M., which has turned into something of a tourist attraction.

The soundbite starts around the 3:16 mark.

Gilligan notes that the couple who own the house have been fine with people visiting the home—as long as they’re respectful about it. However, some fans have been trespassing on the couple’s property to throw pizzas on their roof, essentially recreating the famous scene from the season 3 episode “Caballo Sin Nombre.” The woman who owns the house is often forced to come outside and ask visitors to leave.

“Let me tell you, there is nothing original or funny or cool about throwing a pizza on this lady’s roof,” Gilligan said. “It’s just not funny, it’s been done before, you’re not the first—”

“And if I catch you doing it, I will hunt you down,” Banks piped in.

Have you seen the most recent episode? Not that we needed a reminder, but we really don’t want to get on the wrong side of Mike Ehrmantraut.

Don’t trespass and throw pizzas on Walter White’s house, everyone.