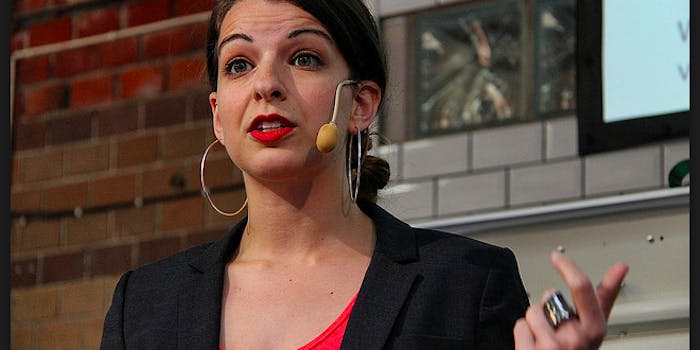 The dust-up sparked a war of words online.

VidCon prides itself on being a convention about “the love of online video,” but many are wondering how this seemingly progressive gathering dropped the ball and let a YouTuber’s harasser into the front row.

VidCon is an annual multi-genre video convention that lets YouTubers as well as online creators come together and speak on panels. At last week’s “Women Online” panel, however, two creators came together who weren’t meant to. And Anita Sarkeesian, an activist and vlogger, came face to face with one of her biggest detractors.

I'm really having trouble believing a convention about "love of online video" didn't know about Gamergate, and didn't have policies in place https://t.co/aEl5DUVIUe

Sarkeesian is known for her YouTube channel feministfrequency where she hosts an ongoing series of videos pointing out differences in gender representation in video games. Due to her outspoken channel, she’s been a frequent target for harassment from men’s rights activists.

During her panel, Sarkeesian was asked: “Why do we still have to talk about the harassment of women?”

She reportedly answered: “Because I think one of my biggest harassers is sitting in the front row.”

That would be Carl Benjamin. Known as Sargon of Akkad, Benjamin is an English YouTube commentator. His early YouTube videos concerned Gamergate and anti-feminism.

VidCon on Tuesday issued a statement about the event, acknowledging the mistake and saying that founder Hank Green had issued a personal apology to Sarkeesian for “not having been more aware of and active in understanding the situation before the event, which resulted in her being subjected to a hostile environment that she had not signed up for.”

The debrief went on: “[I]t is openly known that women on the internet are subject to far greater amounts (and intensity) of harassment and abuse than men. This is a pattern and it’s pervasive. Running this event, we have to be aware when a creator has potentially dangerous harassers or stalkers, and our list for our female creators is a whole lot longer than the list for male creators.”

Sarkeesian wrote about the experience on her Feminist Frequency website:

When you have a history of harassing someone for years, and you show up in the front row at their panel with a camera and an entourage, that is not an act of good faith, to put it mildly. That is itself an act of harassment and intimidation. He and his companions were doing this not just to me but to other women as well, women like Kat Blaque and Franchesca Ramsey, so that we all are aware at VidCon that this man who has harassed us and whose hundreds of thousands of followers have attacked us online for years is here, watching us. It’s a deliberate act to create an environment that feels hostile, to communicate to us that if and when we dare to show up in public to express the ideas that we express online, the harassment will follow us into the physical world as well.

Benjamin however, says Sarkeesian attacked him and he’s awaiting an apology.

He even made a video about the event, telling his side of things. Benjamin says he attended the panel to “engage” with his digital adversary, and learn about how she “would like to be approached” in the futre. Rather than a riveting conversation, he says, a public calling out and subsequent online harassment from partisan fans. (Ironically, something he’s inflicted upon Sarkeesian.)

It remains unclear what VidCon plans to do about preventing these types of YouTuber-on-YouTuber conflicts in the future.