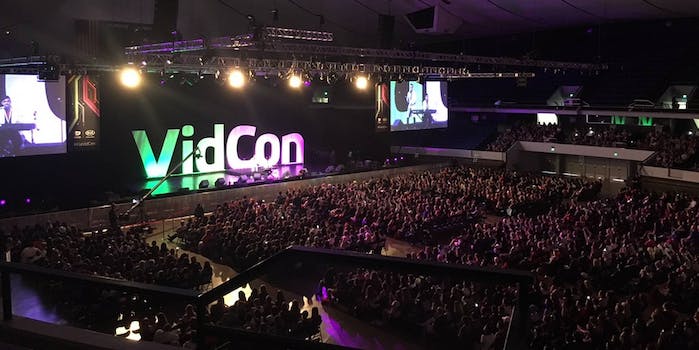 From livestreaming to brands to increased security, VidCon felt different in 2016.

VidCon wanted to be small yet large in its seventh installment, and the annual convention of digital video talent and fans in Anaheim, California, managed to do both while still tacking the question of where digital video’s place is in the wider world of entertainment.

“I don’t want to grow,” explained cofounder John Green in the weekend’s opening address. “I want an awesome audience, not a huge one. If you’re able to engage more deeply with a small audience than a huge one then I’d argue shrinking is good.”

Not that VidCon has physically shrunk. The Green Brothers, who aside from founding the convention are influential creators in their own right, put an emphasis to the industry crowd that smaller doesn’t mean less powerful.

“The most interesting things that are happening in online video are the smaller, more innovative channels,” said fellow cofounder Hank Green. “If you add them up, it’s where more of the views are. Taking a sampling of just the top layer doesn’t tell you the real story. It tells you an easier story. If we don’t represent the reality, we might end up with the same consolidated, homogenized, boring media that we had before.”

One way the convention is battling that is by an emphasis on global. In 2017 they’ll launch smaller VidCons in both Amsterdam and Australia, with a mix of local creators to the regions and big names that are relevant to the fans in that location.

“The internet is a global place, but I really want to connect people with representative voices and not just drown out creators with those who have huge followings,” said Hank Green.

Fan attitudes and actions during the weekend reflected a more segmented and varied approach to what digital fame looks like. In previous years, the trope of the “screaming teen girl” dominated the vibe of VidCon. To be fair, they weren’t gone. Every so often, a swarm would scurry toward the next big star who happened to walk the convention floor or down a path outside the event. Musical.ly, the teen-dominated app that’s known best for snappy lip synch videos, saw some of the biggest crowds on the expo floor all weekend, with a stage set-up that misjudged the draw of talent like Carson Lueders and Jacob Sartorius, 14 years old and 13 years old, respectively.

“It’s Carson!” exclaimed a rushed teen on her way to the stage area just as he wrapped his set. Reportedly, more than 1,500 fans tried to crowd the expo booth to watch Startorius’ performance of his single, “Sweatshirt,” before security had to call off the performance. 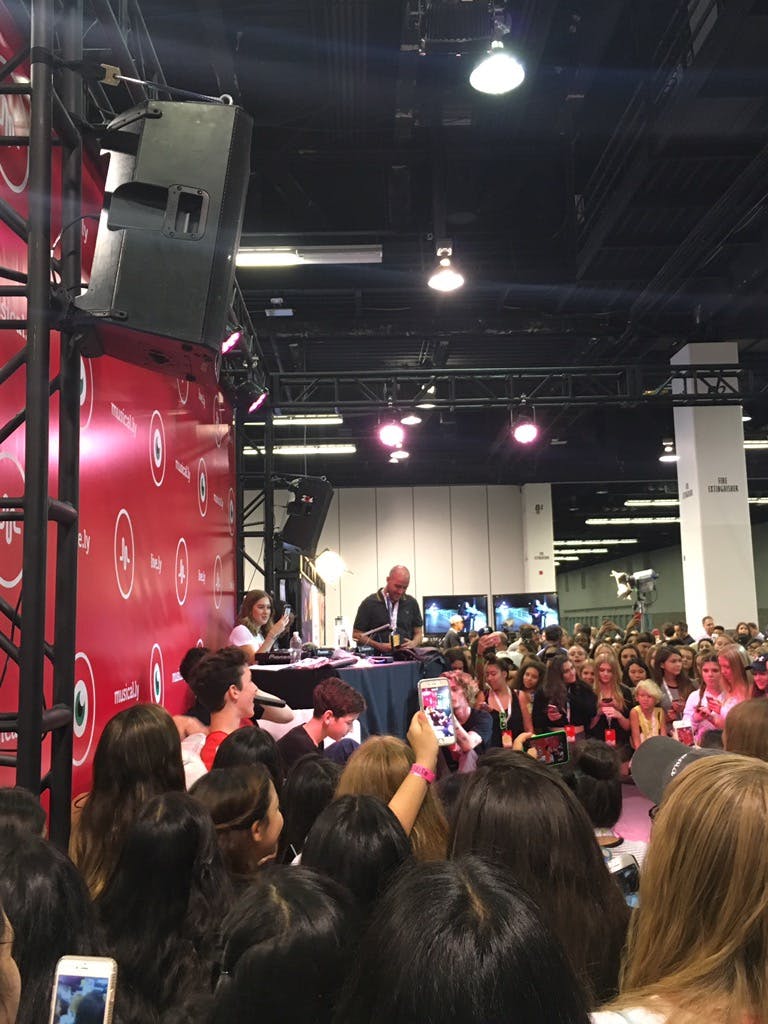 VidCon felt a heightened security presence overall this year. Several top talents, like Joey Graceffa, employed their own personal bodyguards for the event, but VidCon itself upped security practices in the wake of the murder of YouTuber Christina Grimmie and the Orlando mass shooting. Only badged attendees were able to get near the convention center, and areas that had once been routes for fan stampedes in the past were cut off by barricades, along with a mix of security presence from nearby hotels, the convention center itself, and hired-out professionals.

The result was a calmer atmosphere overall, with hub hotels like the Hilton accessible only to guests and featured attendees, with several security checks for different points and levels of access. Those procedures adapted throughout the weekend as some attendees allegedly tried to fake badges to get past checks, but overall it kept industry and talent in a less mob-like situations in and around the convention.

It also inspired the smaller creators using VidCon to build their brands to find calmer, alternative places to connect with fans. One of the most popular was an unsecured fountain near the Arena stage, where parenting vlogger groups met up adjacent to scripted series fans. Those who weren’t lucky enough to procure VidCon badges could still meet their favorite budding stars by the fountain.

Just a few feet away, the arena stage played host to the weekend’s most massive crowds, there for musical performances and variety shows, and eventually the annual VidCon Prom. For Saturday’s event, YouTuber Flula Borg took the stage as MC, with stars like Ricky Dillon, Jon Cozart and Dan and Phil drawing cheers from the packed house. It felt the most traditional interaction of fan and creator that VidCon gets—audience rapt on entertainer. Of course, those entertainers were also listening to the shouts of that audience, reacting, modifying, and essentially collaborating with those who came to watch.

Back on the expo floor, rising apps shared floor space with an increasingly large brand presence targeting the YouTube demographic. The Harry Potter prequel Fantastic Beasts and Where To Find Them kicked off the weekend Wednesday with a special screening to show off a group of international influencers who are creating content around the film.

Brands like SweetTart, 5Gum, and HGTV made their presence known with large installations and giveaways. Kia cars were omnipresent, and the automotive company hosted an ongoing dance party on the expo floor. Nickelodeon was back with its glass box casting booth and an experience around the movie-style reboot of 90s classic Legends of the Hidden Temple. Taco Bell gave away customized Snapchat geofilters for any 24-hour timeframe this summer to any fan who wanted one. NBCUniversal returned with an American Ninja Warrior course.

Other big pushes came from inside the core industry, with YouTube taking up massive real estate on the front of the convention center promoting subscription platform YouTube Red. The YouTube exhibit included interactive photobooths to pique fans’ interest. The platform announced a new set of upcoming titles, as well as pending changes to the comment system during its Thursday afternoon keynote.

Backstage, established and rising stars mingled in an Instagram-sponsored lounge, shot content for Vine. Over at the Hilton, talent enjoyed free massages and drinks from industry lounges sponsored by multichannel networks like Studio71 and AwesomenessTV. Free Calvin Klein merchandise was prevalent, and the brand clearly hopes will make appearances in future popular videos.

Despite being in the shadow of Disneyland, not all issues and topics on the forefront of attendees’ minds had fairytale solutions over the three-day event. Talks about copyright and fair use, major concerns for the digital video community leading up to the convention, felt rehashed and not actionable. Facebook, when asked about monetization and revenue sharing for video creators on an industry main stage, hedged with statements like “committed to finding a model that works,” and “different things will work differently for different formats.” The social network states that it is experimenting over the next couple of months. Meanwhile, massive videos like Chewbacca Mom put no income in creators’ pockets aside from outside deals.

One area where VidCon has started to find its stride is the Creator badge level, the in-between solution introduced last year for attendees who aren’t part of the industry full-time, but are aspiring and above the level of pure fandom. Convened on the second floor, they discussed building brand deals and choosing platforms. Friday’s sessions closed to a massive dance party hosted by content studio Astronauts Wanted. While the invited guests attended a closed party the floor below, anyone with a creator badge could mix and mingle freely, in the true spirit of VidCon.

The Creator-track attendees were heavily courted by the the other big talk of VidCon: live apps. YouTube announced its own mobile initiative but had no on-the-ground presence of it, while Facebook Live kept its focused squarely on invited guests in a private Hilton lounge. Live.me and YouNow both hosted Creator-level booths. Musical.ly also announced Live.ly, its own play for the livestreaming space. There’s still no clear winner among the newcomers and established social networks for which brand will own “live,” if any.

VidCon is still growing, and figuring itself out, even seven years in. It may serve a variety of interests, from the business to the creative to the fan, but its hopes are clear. John Green explained the difference between mainstream media and digital media by comparing it to the difference between CBS’ NCIS, a broadly appealing show made by a media conglomerate, to RadioLab, NPR’s small show with a broad impact. With a diversity of creators, from big to small, Green and VidCon want digital video to be that broad impact no matter the audience size.

“I think online video is about hearing the voices of those we otherwise wouldn’t hear,” said John Green. “I think we’re playing a different game, and I think that’s how we’re going to win.”