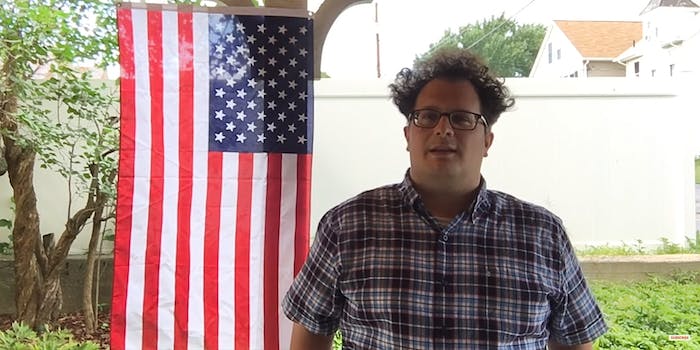 How does one find comedy in a presidential election as surreal and scary as 2016’s? By amplifying the absurd.

Over the last year, Vic Berger, a video editor for Super Deluxe, has been taking the gaffes and dumpster fires of the presidential election and remixing them, chopping up candidates’ speeches and focusing on repeated words, or zooming in on their forced smiles and erratic gestures to produce a more primal, chaotic performance.

Last July, his profile was raised after he vowed to get a Jeb Bush neck tattoo if his vine got more than 1 million views. He later trolled the room by pretending to get the tattoo.

Berger has been reporting all week from the Republican National Convention with Super Deluxe and fellow comedian Tim Heidecker, where he’s ready to zoom in on one of his favorite human canvases, Donald Trump.

Berger’s talent is in finding the tiniest detail or quirk and repeating it, blowing it up. In stripping away the posturing and noise (sometimes literally), he’s making these politicians a little more relatable—or at least more interesting.

Well, most of them.

What made last night's Cruz moment even better was imagining the @VicBergerIV version while it was happening.

His work doesn’t stop at politicians. Berger’s obsession with musician Chubby Checker has been well-documented on Vine and in his Vic Berger Presents series, and he’s responsible for one of the best distillations of Steve Harvey’s existential struggle.

As we wait for Trump’s speech Thursday night, here’s Berger’s “best of” collection to gaze upon.

Celebrate Trump's candidacy with this Vine collection of his best moments
(by @VicBergerIV)#RNCinCLE #vicRNChttps://t.co/9VTE3vEwuh

He will also be remixing the DNC next week.