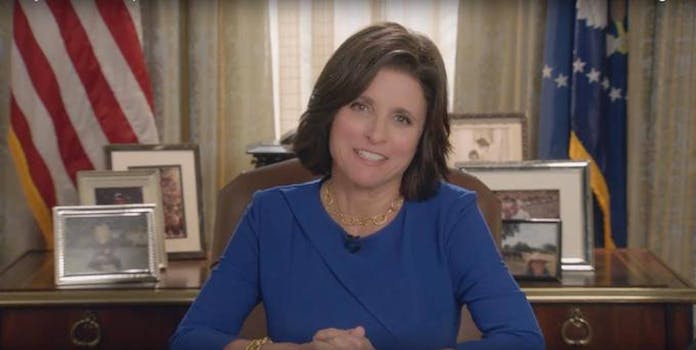 The fake documentary from ‘Veep’ has an official site

If you’ve been watching season 5 of Veep, then you know that President Meyer’s daughter Catherine has been quietly plugging away at her thesis film, Kissing Your Sister: The Story of a Tie, by following her mother around the White House. The documentary finally debuted during Sunday night’s episode, and as a special gift to fans, the writers have also created an entire website to go along with it.

The site is jam packed with fake promotional materials for the film, including screening information, upcoming “Marjorie Films” projects, and behind-the-scenes interviews with the cast:

Veep showrunner David Mandel told Vulture that the site was the “logical extension” for her documentary, and a good way to share all the extra footage they shot for Sunday’s episode.

“What’s really fun about it is, it doesn’t have the pressure of being the show,” he said. “It can just be. If you find it and enjoy it, great. If you never see it, it doesn’t take anything away.”