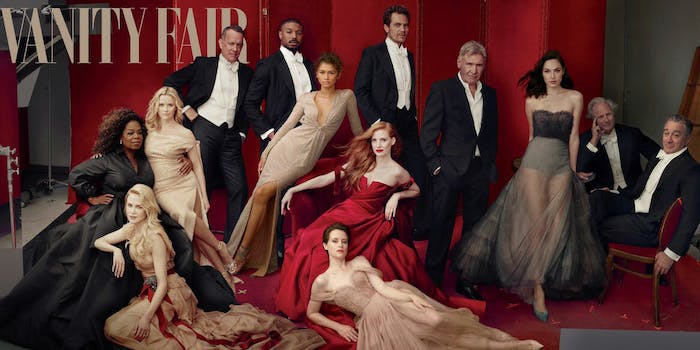 He was cut after the shoot.

While the portfolio originally intended to showcase 13 actors making waves in the industry, it decided to remove actor James Franco from the photo last minute, the Hollywood Reporter reports.

The magazine removed Franco from the shoot after allegations against him from five women were published in the Los Angeles Times this month. He had already sat for his portrait and an interview, according to the Hollywood Reporter. Apparently, Franco’s past of hitting on underage women wasn’t enough to keep him out of the shoot.

“We made a decision not to include James Franco on the Hollywood cover once we learned of the misconduct allegations against him,” a Vanity Fair spokesperson said.

Franco continues to deny the allegations in the Los Angeles Times story but has begun to distance himself from the industry by foregoing red carpet appearances during the 2018 awards season.

Often photographers opt to photograph models in an ensemble photo separately since it can be incredibly difficult to get a large number of high-profile people together in one room at the same time. Photographer Annie Leibovitz shot each actor separately and then digitally placed them in one photograph, making it easy to remove Franco from the shoot.

Unfortunately, it looks like the digital modification led to a few errors, as well. Some users on Twitter pointed out that it looks like Reese Witherspoon has three legs and Oprah has three hands.

im tryna figure out how many legs reese witherspoon’s got in here, it’s been bothering me for the last five minutes pic.twitter.com/u1uQ63sDdd