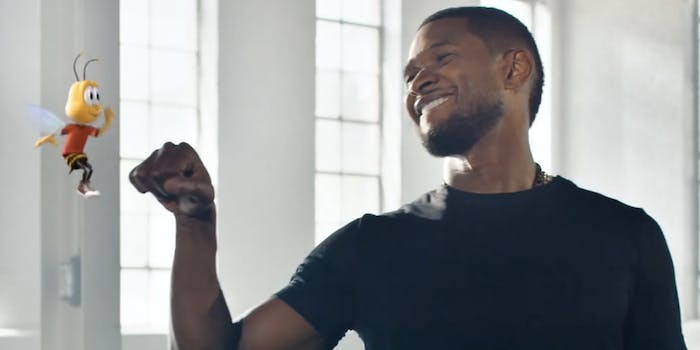 Must be the honey.

There’s a lot of alternative ways to release youy music and make a splash nowadays. U2 partnered with Apple to force their new release on everyone with iTunes, for example. Now Usher is rolling out a hyperspecific way to get your hands on his newest single, “Clueless”: buy a box of Honey Nut Cheerios.

However, you can’t just go to your nearest store for the box. The Usher tie-in only works on boxes sold at Walmart, which means he’s slicing his demographic pretty thin at this point. The new single drops via specially marked packages on Tuesday while anticipation mounts for Usher’s next album, UR.

Usher’s already partnered with Honey Nut Cheerios in the past, dancing with the cereal’s bee mascot in a video set to his last single, “I Came to Give It to You.” This is also not Honey Nut Cheerios’ first dalliance with pop music to move its product. In 2013, the brand did an entire campaign set to a parody of Nelly’s “Ride Wit Me,” rerecorded to proclaim, “Hey, must be the honey.”

We assume Usher’s single is not bee-themed.