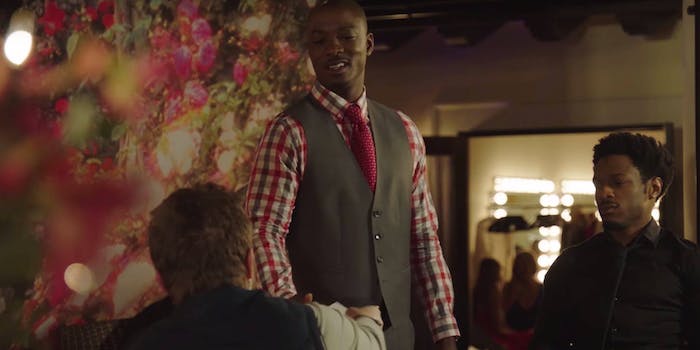 Progress takes on ratings in season 2.

In season 2 of UnREAL, Lifetime’s series about the machinations of a dating reality show called Everlasting, we’re introduced to a black male suitor for the first time on TV. It’s something not even The Bachelor, a show that’s been on for 20 seasons, has done yet.

Co-creator Sarah Gertrude Shapiro worked as a producer on The Bachelor, so she has a more informed view its inner workings than most. And UnREAL is certainly a show about inner workings. It focuses on a new kind of power couple: producers Quinn (Constance Zimmer) and Rachel (Shiri Appleby), who make Everlasting (and its foundational drama) happen. In last week’s debut episode, Rachel boasts that she’s responsible for this history-making black suitor, which foreshadows what race might really be used for.

Before an UnREAL panel at this past weekend’s ATX Television Festival in Austin, Texas, Shapiro said the introduction of Darius Beck (B.J. Britt) a football player in need of an image makeover after saying “bitch, please” to a white female reporter, was something important they needed do with the platform.

Last season, two black female contestants were told early on what they needed to do to win by Jay (Jeffrey Bowyer-Chapman), Everlasting’s black, gay producer—fit into very specific stereotypes about black women. This season, we’re introduced to contestant Ruby, a black activist who’s told by Rachel that she could use the show to further her platform. But, since this is UnREAL, we have a feeling that she’ll also manipulated into a stereotype for ratings. As Quinn explains to an exec in season 2’s debut episode, the first time Darius puts his hands on “white ass,” Twitter will melt down. And just like that, progress is at odds with ratings.

Shapiro says that with that scene, they wanted to show that “Rachel’s the idealist and Quinn’s the realist. And it actually takes both of them to get the job done.” But they also wanted to shine a light on the conversations that often happen behind the scenes, and further explore how TV and media often mold black men and women to be more palatable to a larger audience. “To be palatable but also to make fun of them,” adds executive producer Stacy Rukeyser.

“It’s a reality that can’t be ignored,” says Bowyer-Chapman. “It goes back to how black people have been treated in America for centuries. The history of slavery in this country has affected not only how black people see themselves, but how white people see black people as well, and the roles they’re meant to play. … I’m aware of it, as a person of color. I tend not to play this game with myself anymore, but for many years I realized that the more general that I was, the more doors I could walk into without people questioning me. So I think to have a character like Ruby, who is the complete antithesis to that, who is not only a very educated woman but a black rights activist, who is going to stand her ground and give a different perspective to the world of Everlasting, is an incredible story to tell.”

In the second episode, which debuts tonight, Ruby takes it a step further, wearing a shirt that reads “I can’t breathe,” the last line uttered by Eric Garner before being killed by police in 2014. She’s using it to send a message, but the producers are wired to mine it for ratings. It reflects the media attention Black Lives Matter activists received, though not always in ways that elevate it.

“The Eric Garner case was for me and probably for most of us, a pretty big watershed moment of, the state of racism in this country is really over the line,” Shapiro says. “When we were doing research on some of those cases, we read a lot of police testimony after some of these shootings, where they described the unarmed black men in a very similar way, as like monsters, animals, beasts, superhuman, threatening. These words just keep coming up. And what we were talking about is, if the only images of black men on TV is of violent offenders… we just wanted to put up pictures of a black prince charming, and just let that be.

“We have an obligation to fill some of our screen time with images that matter.”

“If you’re a woman, you’re going to be judged on something that’s out of your control.”

Says Bowyer-Chapman says: “It really is systematic oppression that is so deeply ingrained into the very fabric of American society. … Shedding a light on it, in whatever way possible, is the only way to create change.”

So why has The Bachelor not had a non-white suitor yet?

“They have a formula that works for them and they’re scared to fuck with it,” says Bowyer-Chapman.

“They get incredible ratings,” Rukeyser says, “and so I understand why they would be afraid to mess with the formula. But we’re lucky enough to not have to worry about those things.”

UnREAL also explores women’s complicated relationship with feminism. In the series pilot, we first see Rachel lying on the floor of a limo, surrounded by the show’s potential “wifeys,” wearing a shirt that says, “This is what a feminist looks like.” As the season goes on, we struggle with that declaration, as Quinn and Rachel break down the female contestants while also trying to wrestle power from the men in charge.

“I think in an era where there are so many confusing messages for women—lean in, lean out; opt in, opt out; have babies, who cares—nobody knows what the fuck they’re supposed to be doing,” says Shapiro. The focus on women at work was organic and not something Shapiro or Rukeyser thought of as particularly revolutionary, until critics and viewers started talking about it. For all its woman-on-woman manipulations, UnREAL is a show where two female protagonists talk to each other about work and their friendship is the love story. As we see at the beginning of season 2, their matching “Money. Dick. Power.” tattoos solidified that.

“We have a rule of thumb in the writers’ room,” says Shapiro. “When you’re writing Quinn and Rachel, make sure that they’re talking to each other like Walt and Jesse from Breaking Bad, and not like Serena and Blair on Gossip Girl. And when you really break down what that’s about, they’re talking about strategy and winning and efficacy and doing your fucking job, and not talking about, you hurt my feelings, I want my boyfriend back. So that is the calibration of those characters, and I never thought of it as male, but they really do talk to each other like a team, like, ‘We gotta get this shit done.’”

“A lot of the women I know in my life, they’re working all the time,” says Genevieve Buechner, who plays fledging producer Madison. “The women I know have to work 10 times as hard to get anywhere near where a lot of the men are. Even in acting, I get turned down because they don’t like the way my face is, or they don’t like the way my body is. It’s so based on the way I look as opposed to what I can do. And in any field, it seems that way. If you’re a woman, you’re going to be judged on something that’s out of your control.”

But, as we saw in last week’s episode, Madison is being manipulated too. In one of the most intense scenes, she must draw out the pain of a contestant who recently lost her fiancé, with Rachel in her ear, pushing her further. She does her job, visibly sickened, but then she feels the rush.

In doing what a real TV show still hasn’t done, UnREAL is creating a conversation, one that’s already been taking place on social media alongside conversations about the stereotypes shows like The Bachelor and The Bachelorette perpetuate, and how they deal with things like rape jokes. We’ll have to wait and see if it leads to real progress.