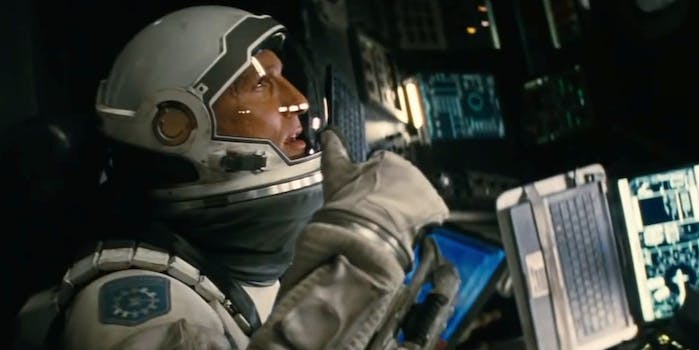 See if you agree that these are truly plot holes.

Neil Degrasse Tyson had surprisingly few problems with the science of Interstellar, praising the movie for its depiction of relativity and wormholes. But as a casual viewer, Tyson spotted quite a few plot holes.

The notion of a plot hole is always somewhat controversial, because one person’s mistake is another person’s suspension of disbelief. It’s virtually impossible to make a movie without something that can be picked apart as a illogical nonsense, particularly if you’re making a sci-fi blockbuster. The question is, at what point are there so many plot holes that it looks like lazy writing, rather than just a brave attempt at an admittedly fantastical story? For Tyson, there were nine details in Interstellar that stood out—and true to form, he took to Twitter to discuss them.

Mysteries of #Interstellar: If you can poke through a tesseract and touch books, why not just write a note & pass it through.

Mysteries of #Interstellar: Who in the universe would ever know the titles of all their books, from behind, on an bookshelf.

Mysteries of #Interstellar: How a pickup truck can drive with a flat tire among densely planted corn stalks taller than it.

Mysteries of #Interstellar: If you crack your space helmet yet keep fighting, the Planet’s air can’t be all that bad for you.

Mysteries of #Interstellar: Can’t imagine a future where escaping Earth via wormhole is a better plan than just fixing Earth.

If you’re wondering how so many of these so-called plot holes slipped through the cracks, the answer is that without them, we wouldn’t have a movie. If this were a movie about humankind terraforming Mars and moving there instead, Christopher Nolan wouldn’t be able to tell an epic story about wormhole travel and title it Interstellar. Similarly, if the people in Interstellar had the option of saving Earth instead of abandoning it, we’d be watching a movie about farmers rather than astronauts.

Regardless, Tyson makes some good points about stretching the limits of our suspension of disbelief. How does Cooper know which books to push through the shelf? And why doesn’t he just write a note, or find a less obscure way to communicate than by manipulating the second hand of his daughter’s wristwatch? In the end, the most satisfying answer may simply be, “It’s just a movie.”