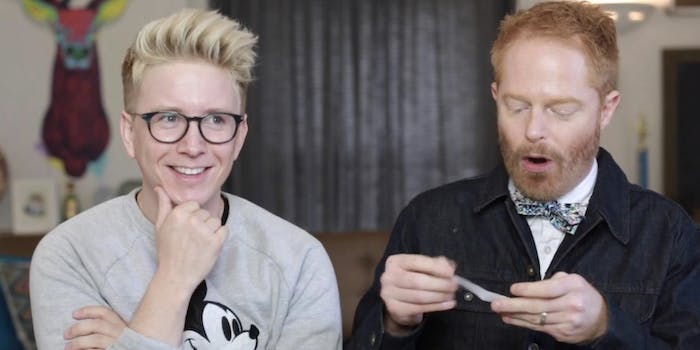 The pair may or may not be a budding rap duo.

For fans hopeful for a musical moment from YouTube superstar Tyler Oakley, his joking rap duo with actor Jesse Tyler Ferguson might be as close as they’ll ever get.

Oakley welcomed the Modern Family star on a recent video, where the pair joked about being “just two teens hanging out,” chatted about Ferguson’s theater career, and gave their best QVC impressions while hawking Ferguson’s bowtie line.

Oakley has played host to big-name stars before, including One Direction and Darren Criss during his annual Auguest series, as well as First Lady Michelle Obama. Oakley and Ferguson are pals outside of the confines of the YouTube video, and Ferguson jokingly explained how taking Oakley with him on a Disneyland trip was more stress than it was worth.

“Because I work for ABC, I get special treatment at Disney,” explained Ferguson. “I had a lady who helped us get around quickly. I was not the problem, though. I had no idea I was taking the most famous person in the world. By the fourth hour I was like, ‘Leave him!'”

Ferguson joined Oakley to promote his own bowtie line, Tie the Knot, which supports marriage equality initiatives. The guest appearance is definitely in line with Oakley’s admitted goals for 2015.

“I think a lot of what I wanted to do in 2014 was build a repertoire or a portfolio for what I can do with traditional celebrities or with brands or whatever,” Oakley told the Daily Dot earlier this year. “Maybe 2015 is the year I start reaching out to people I always dreamed to do stuff with.”

If amping up the celebrity quota on his channel is in the cards, you can’t go wrong with a Modern Family star.