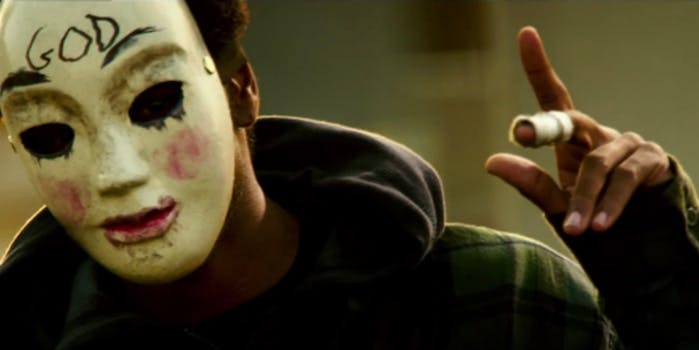 The damage of the #twitterpurge doesn't go away when the credits roll.

The Purge: Anarchy, the follow-up to 2013’s sleeper hit The Purge, was released on Friday, and as with so many films attempting a promotional social media surge, a hashtag started circulating over the weekend: #twitterpurge. And it didn’t go well.

The Purge franchise envisions a future where one night a year, all crime is legal, and that plotline was taken literally on Twitter. The Guardian reported that last Wednesday, a Twitter account appeared with the name “SCV Purge,” referencing the Santa Clarita Valley area, just north of Los Angeles. Nude photos of “what appears to be underage kids” showed up on the account, Sgt. Brian Hudson of the Los Angeles County Sheriff’s Department Special Victims Bureau told the L.A. Times.

When you see the owner of the Scv purge account getting jumped but you remember he tweeted about you pic.twitter.com/6fufKJ1obT

The SCV Purge account was quickly removed by Twitter, in accordance with its child sexual exploitation policy. But, this being Twitter, copycat accounts appeared in an effort to continue shaming women for their nude photos. Then it spread to Facebook and Instagram, where more nude photos appeared, all to continue the trend.

The #twitterpurge hashtag, which was apparently started by students in South Florida, according to this YouTube clip, offered people another chance to continue putting anything they want on the Internet. Some people revealed info about conspiracy theories or secret crushes, but mostly it was nude photos, many without consent. It was trending on Twitter yesterday, and remains a popular hasthag today, five days after the release of the movie. Flavorwire’s Tom Hawking asked a Twitter rep for clarification on its policy:

After less-than-helpfully redirecting me back to the policy itself, a Twitter spokesperson finally told me the following: “We do not proactively monitor content on the platform. Users should report potential violations of our rules through individual Tweets and forms available on our site.”

“I think that it happened because there is nothing to do in Santa Clarita, and some people found the drama entertaining,” Morgenstern said. “I guess it makes them feel better about themselves by doing this to other people.

Earlier this month, the story of a 16-year-old named Jada started circulating. She was raped at a classmate’s house during a party but only found out about it after photos and videos mocking her assault appeared online, and on Twitter. She fought back against the subsequent cyberbullying and humiliation, but many young girls in similar situations don’t or can’t, and feel taking their lives is the answer. This #twitterpurge, based in the fantasy of a horror movie, has caused real damage, which isn’t something that goes away when the credits roll.

A #stopthepurge hashtag is circulating in protest, and yes, it was a failure on Twitter’s part that nude photos of teenage girls were “trending.” Twitter’s policies are in need of restructuring; this was evident when it attempted to change its block function in December, and the Internet shouted back.

This incident shows how quickly something can get away from a social network, and exist in a dangerous grey area. Even more troubling are the lengths people will go to when they’re anonymous and feel they’re absolved of wrongdoing under some imagined hashtag law. The sequel’s tagline mirrored people’s actions online: “Some do it for revenge. Some do it for fun.”

The Purge is purported to be set in some future dystopia, but it feels like the Internet’s already there.