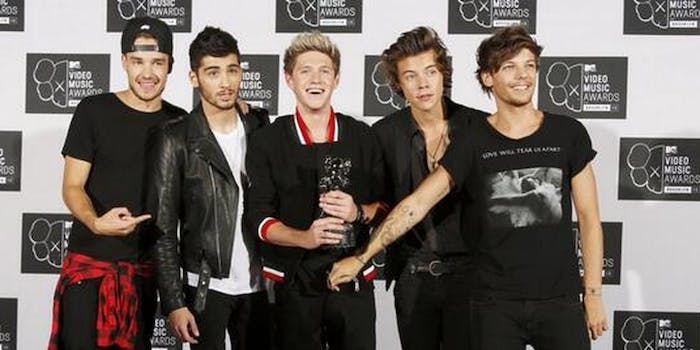 GIF Hell tracks the most popular GIFs on Twitter

The MTV Video Music Awards (VMAs) Sunday night were the first real test of a redditor’s grand experiment to track the most popular GIFs on Twitter in real time.

His site, aptly called GIF Hell (may be NSFW), launched over the weekend, just in time to capture the VMA moments that instantly went viral and were immortalized as infinitely-repeating GIFs: Miley Cyrus’s performance, with special guest Miley Cyrus’s tongue. Lady Gaga’s seashell bikini. Anything featuring One Direction.

GIF Hell features a list of current popular GIFs, based on the number of times each has been tweeted. It also has an all-time leaderboard, which will be a lot more interesting when the site is more than 2 days old. In that short time, though, GIF Hell has already indexed more than 100,000 GIFs (though many are duplicates).

To give a flavor the moments that caught fire at the VMAs (and elsewhere), here are 10 trending GIFs that appeared on GIF Hell Monday morning:

2) A meeting of the K-pop minds

G-Dragon bowing to Exo accounts for several of the top slots on GIF Hell.

3) Ed Sheeran looking super thrilled to be at the VMAs

4) Styles struggles to unhook a fish

9) Knowing when to close your laptop

This is a reaction GIF that bore captions such as “when my ex messages me on Facebook.”

A running Doctor Who joke from when Tennant hosted quiz show Never Mind The Buzzcocks.