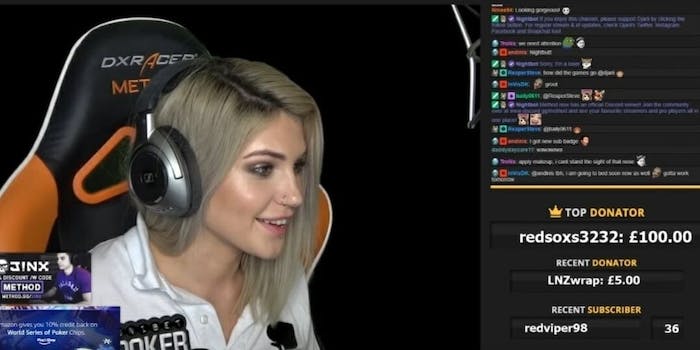 After noticing that Twitch streaming star DrLupo unbanned one of his subscribers after they wrote him a 1,000-word apology, another Twitch streamer decided to try something similar.

But Djari328 had a decidedly different outcome. Instead of a sincere note of regret, she was forced to check her archives to determine why she had banned a subscriber in the first place. And then she exposed that person for sending her multiple creepy messages.

Earlier this week, DrLupo tweeted that he would unban a subscriber who had called him a “cancer” if that person penned a 1,000-word essay explaining why that was wrong and why the user was sorry for doing so.

After seeing that, Djari328 followed suit.

New unban policy, taking a leaf out of DrLupo's book. If you want an unban, 1000 word essay on why what you did was unacceptable. 😎 https://t.co/eBVLFfjws5

That led to an exchange between Djari and one of her former followers, Pot8o, who said he had no idea why he had been banned by her in the first place.

She investigated. And found this.

Included in his chat record, he asked her to show her underwear and said he’d lick her armpit. He also wrote that “I constantly have a boner for Djari.”

Needless to say, she wasn’t interested in reading an apology, and Pot8o then blocked her from following him on Twitter.

He was fast on blocking me, so no screenies, just the photos I took to show my friends and laugh. :D Gotta love Twitch chat perverts getting called out on their crap! :D

Djari328, who has 292,000 followers on Twitch, also noted that she hoped he was embarrassed by his comments (based on the fact he immediately blocked her, it’s a good bet he was).

This was a much different outcome than DrLupo received when he said he would unban his subscriber. That Twitch user wrote in their apology, “I would never be able to imagine what immense pain the [cancer] victims have to go through with their families, so I would never want that pain to be inflicted upon you or anyone for that matter.” They also called DrLupo “forgiving and merciful.”

Unfortunately for Pot8o, the same could not be said for Djari328—and hardly anybody would blame her.