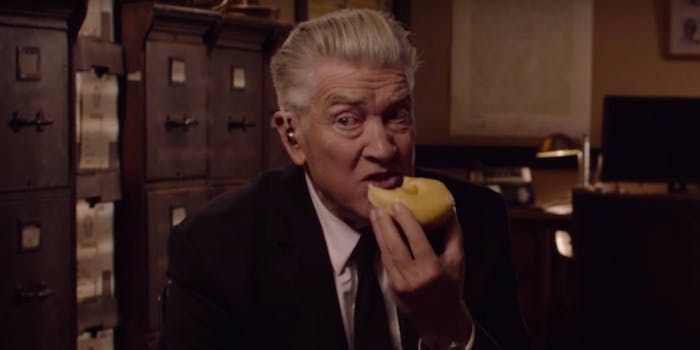 Is it really happening? We donut know.

Showtime’s revival of Twin Peaks is slated to debut in 2017, which means Jan. 1 was the day to start wildly speculating about whenwhenwhen.

According to Deadline, an anonymous source close to Sundance claims that “conversations are ongoing” about screening the new series at the film festival this month. There’s also been speculation about the series screening at a Television Critics Association press event on Jan. 9.

Take this news with a grain of salt, however. The rebooted series has seen its share of pushbacks and internal conflicts since being announced, and co-creator David Lynch has been vocal about keeping an aura of mystery around the proceedings. And yet co-creator Mark Frost took to Twitter on Tuesday to say that Twin Peaks is definitely not screening at Sundance.

Just to quash a silly rumor going around: Twin Peaks is NOT, repeat, NOT going to be shown at Sundance this year.

However, a photo of an alleged Showtime calendar points to April or May for the release.

Well, at least we got to watch Lynch eat a donut.