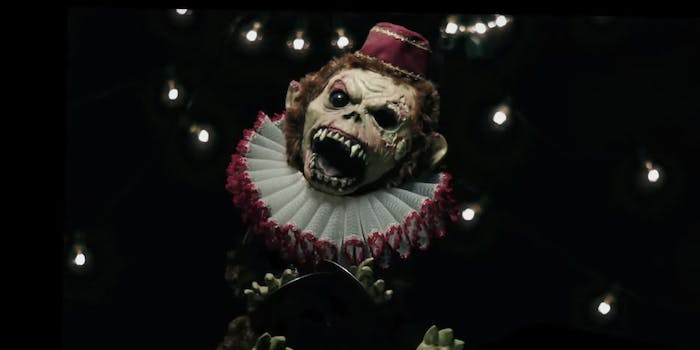 TV anthologies were a staple of the programming lineup back in the glory days of The Twilight Zone and The Outer Limits, a natural outgrowth of the tales of terror and suspense that had flourished during the era of radio dramas. The format has come and gone over the years, but it’s seen a recent resurgence thanks to modern anthologies such as American Horror Story, True Detective, Black Mirror, and Fargo. Thankfully, many of the best examples of the form are only a Netflix, Amazon, or Hulu subscription away. With Halloween creeping ever closer, allow the Dot to be your guide through some of the best spooky TV anthologies currently populating the streaming landscape.

Given how well tales of horror and suspense lend themselves to the anthology format, the Master of Suspense pretty much has to make an appearance on this list. While Hitchcock is best known for his classic big-screen thrillers such as Psycho, The Birds, and Rear Window, he helped establish his larger-than-life persona through Alfred Hitchcock Presents, which forever made his silhouette iconic and saw him introducing each twisty caper with a morbid sense of humor. With each episode telling its own self-contained tale, an anthology series lives or dies on the strength of its stories, and AFP recruited some of the best mystery and suspense writers of its era, including Charles Beaumont, Robert Bloch, Ray Bradbury, John Collier, George Clayton Johnson, and Roald Dahl. Hulu has four seasons of Alfred Hitchcock Presents available, and the first season can be seen on Netflix Instant.

If you were to narrow the field down to only one defining anthology TV series, there’s no question that Rod Serling’s Twilight Zone would be the last man standing. Serling brilliantly used genre storytelling to comment on mankind’s flaws, struggles, and stubborn potential, all disguised as harmless tales of suspense and science fiction. Serling himself was responsible for penning some of the show’s most memorable outings, including “Walking Distance” and “The Monsters Are Due on Maple Street,” but he also enlisted the talents of genre giants such as the aforementioned Beaumont and Johnson, as well as Richard Matheson. There are so many unforgettable episodes that made an indelible impression on our pop culture history, from the cruel punchline of Burgess Meredith’s busted specs in “Time Enough at Last” to William Shatner’s encounter with a gremlin in Matheson’s “Nightmare at 20,000 Feet.” The Twilight Zone pretty much defines anthology storytelling, and there’s a reason it’s been revived multiple times over the ensuing decades. Four of the show’s five seasons are available on both Amazon Prime and Netflix Instant (not sure why season 4 is an exception).

The Outer Limits was Twilight Zone’s crazier, sci-fi-obsessed little brother, the one who liked his human drama spiced up with an equal serving of bug-eyed aliens (or, as in the memorable “Zanti Misfits,” alien bugs). Its opening narration is nearly as infamous as Serling’s Twilight Zone openings, with an alien voice insisting that “There is nothing wrong with your television. Do not attempt to adjust the picture. We are controlling transmission.” There aren’t quite as many unquestioned classics among The Outer Limits’ original run as there are in The Twilight Zone, but the show does hold the distinction of having two episodes penned by the legendary Harlan Ellison: “Soldier” and “Demon with a Glass Hand.” Hulu has both seasons of The Outer Limits available for subscribers.

Serling followed his masterpiece Twilight Zone up with Night Gallery a decade later, which shifted focus more to stories of straight terror rather than Zone’s morality tales. And once again, Serling often turned to genre literature for source material, adapting tales by folks such as Fritz Lieber, August Derleth, Algernon Blackwood, Richard Matheson, and, of course, H.P. Lovecraft. One early episode was also directed by a young bloke named Steven Spielberg. I wonder what ever happened to that guy… Hulu has all three seasons of Night Gallery available streaming.

Just like its predecessor The Twilight Zone, The Outer Limits was eventually resurrected decades later. Sadly, the surprisingly excellent ’80s incarnation of Zone isn’t available streaming, but the also noteworthy ’90s Outer Limits is. The Outer Limits originated on Showtime before eventually hopping networks to the Sci Fi Channel in 2001. Over the course of seven seasons, the new Outer Limits adapted tales by genre luminaries such as Harlan Ellison, A.E. van Vogt, Larry Niven, Stephen King, George R.R. Martin, and Richard Matheson (he shows up a lot in this list). In an intriguing twist on the traditional anthology format, the revived Outer Limits mixed ongoing story elements into its standalone episodes, creating overarching narratives that played out across a season in various ways. You can watch all seven seasons of The Outer Limits on Hulu.

I was a little too old to be the key demographic for the TV incarnation of R.L. Stine’s beloved Goosebumps books, but that doesn’t mean this kid weaned on Scary Stories to Tell in the Dark can’t appreciate the show’s nostalgic power to many. Airing on Fox Kids here in the States and YTV in Canada, Goosebumps adapted the creepy tales that many a ’90s kid devoured by flashlight beneath their blankets. Even better, that generation is now of child-bearing age and they just made a Goosebumps movie, so now is the perfect time to get your kids hooked on a spooky little slice of your childhood. You have to admire any series that included an episode entitled “The Cuckoo Clock of Doom.” Netflix Instant has the whole series available for your eerie enjoyment.

Created by horror vet Mick Garris (The Stand) for Showtime, Masters of Horror did for modern horror what Twilight Zone did for its era, mixing original stories with adaptations of classic tales of terror by Lovecraft, Clive Barker, Edgar Allan Poe, and (of course) Richard Matheson. Damn near every noteworthy horror director of the past 30 years helmed one of these things, including Don Coscarelli (Phantasm), Stuart Gordon (Re-Animator), Dario Argento (Suspiria), Tobe Hooper (Texas Chainsaw Massacre), Joe Dante (Gremlins), John Landis (An American Werewolf in London), and John Carpenter (The Thing), to name just a few. There have been a few other modern TV horror anthologies, but few have assembled this sheer quantity of talent. My personal favorite installments are Gordon’s “Dreams in the Witch-House,” Carpenter’s “Cigarette Burns,” and William Malone’s “Fair Haired Child.” You can watch Masters of Horror on Hulu.

FX’s American Horror Story really kicked off the recent resurgence of anthology television that has continued in shows like True Detective and Fargo. Created by Ryan Murphy and Brad Falchuk (Glee, Nip/Tuck), AHS explores iconic tropes and locations of horror fiction. Thus far, those have included haunted houses, creepy insane asylums, a coven of witches, a dark carnival/freak show, and, in the currently airing fifth season, a hotel where bad shit happens. Unlike the self-contained episodes of most of the shows on this list, each season of American Horror Story is a new story, often with recurring actors—such as Jessica Lange, Sarah Paulson, and Kathy Bates—playing different roles in different installments. Intriguingly, however, there are hints that all of it is unfolding in some connected universe, as last year’s Freak Show series brought back characters previously seen in season 2’s Asylum. AHS is a decidedly hit-or-miss affair, but there’s no questioning its influence on the TV landscape, and when it’s firing on all cylinders, it’s loads of fun. The first four seasons of American Horror Story are available on Netflix, Hulu, and Amazon Prime.

Created by British writer Charlie Brooker (Dead Set), Black Mirror is a true successor to The Twilight Zone for the smartphone age. Like Serling’s classic series, Mirror uses the trappings of science fiction to explore our own modern culture, the blessings and perils of technology, and the larger human condition, showing us dark reflections of futures that are all too believable. And the line between truth and fiction blurred entirely a few weeks ago when British Prime Minister David Cameron was involved in a scandal that echoed Black Mirror’s first episode, in which a fictional PM is blackmailed by terrorists into screwing a pig live on television. Black Mirror is smart, funny, bleak as hell, and—saints be praised—due to return for a third season on Netflix. The first two seasons, consisting of a binge-friendly total of six episodes, can be streamed on Netflix, but sadly the excellent Christmas episode starring Mad Men’s Jon Hamm hasn’t made it onto the service yet.

The Canadian horror anthology series Darknet wasn’t on my radar at all until one of my horror buddies texted me and said, “Dude. Darknet. Netflix. Get on it.” I dove into the first episode with no more foreknowledge than that, and it was definitely a pleasant surprise. Each episode contains several short, interconnected stories, usually setting the viewer up for a pitch-black twist or two; the riff on Rear Window made me utter an audible “oof.” The first episode is particularly sleek in the ways it folds back in on itself without you realizing it’s doing it at first. The unifying element in all the stories is Darknet itself—a mysterious website where morbid curiosity seekers and genuine psychos can interact and post videos and stories. Darknet would make for perfect Halloween-night viewing, so add it to the queue and make plans for after the kids are asleep and the tricks and treats have been doled out. All six episodes of the show’s first season are available on Netflix.