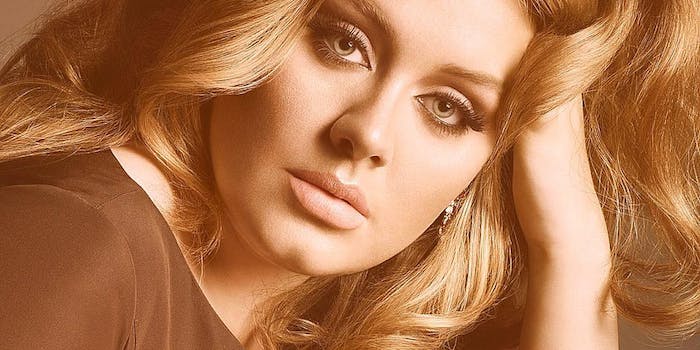 Rumor has it Adele is planning a 2015 album, tour

But here are all the rumors so far.

While it’s been more than three years since Adele released her breakup-inspired 21, we still tear up every time we hear “Someone Like You.” But thankfully for Adele, those three years have held happier times. The singer found love again thanks to beau Simon Konecki, experienced the joy of motherhood with the birth of her son Angelo, and won enough awards and Grammys to sink a ship.

Though the singer’s been busy with family for the past few years, a tweet dispatched Tuesday night by the World Music Awards Twitter account announced that the singer will be returning not only to the stage, but the to hearts of her fans with a new album.

#adele confirms 2015 Tour After The Release Of Her New Album ‘25’! pic.twitter.com/ZePWnwXXQH

While there has been no official announcement from the singer or her representation on an album release or tour, the title does fall in with the previous age-related LPs 19 and 21. Back in May, on her 26th birthday, the singer tweeted a photo with a rather cryptic blip about 25.

While it does seem a bit bizarre for the announcement to come from the social media account of a music award show held two months ago, it’s hard not to be excited with the promise of new music from Adele. While we wait with baited breath to see if the Brit pulls a a Beyoncé, with a suprise album release as the Daily Star reported, we’ll be streaming her on Spotify all day and feeling all the feelings.