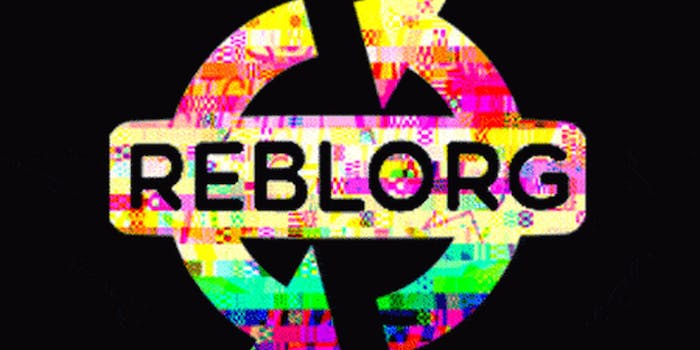 Tumblr’s Reblorg kicks off in style

The Tumblr editorial team is heading up this art initiative to highlight thriving yet unknown artistic communities.

Across the street from Brooklyn’s McCarren Park, a Tumblr party was in full swing at the King & Grove Wednesday night.

Bikini-clad beauties played in the saltwater pool, each taking turns riding a blow-up dragon. In the corner, a DJ mixed some thumping beats while a projector played a never-ending loop of quirky GIF animations and glitch art. And all around the pool, young netizens in form-fitting threads tipped back drinks in hump day bliss while snacking on food truck delicacies.

It was a fittingly eclectic celebration for Reblorg, a new art hub run by Tumblr’s editorial team. And like the party itself, there’s a whole lot going on, and the people there are less concerned with what it is than they are with having fun.

“It’s hard to define what the content is. What is the new aesthetic? What is the Tumblr aesthetic, which is the subset of that,” Reblorg creator and Tumblr staffer Christopher “Topherchris” Price said poolside. “You just know it when you see it. It’s a lot of GIFs and that kind of stuff, but we’re getting submissions that are totally different. We’re getting fine art, we’re getting paintings, haikus. Hopefully it will be a little bit of everything.”

Since Tumblr launched the blog on Monday, Reblorg has collected more than 3,000 followers and more than 200 submissions. But like EatSleepDraw, the premier source for original art on Tumblr, the selection process for what makes it onto the site will be fierce.

Reblorg currently features surreal art ranging from a GIF of a hot dog surfing on a piece of pizza through space to an image of NASA’s Curiosity rover driving on a rainbow road. Price and the editorial team have reached out to 100 Tumblr users to encourage them to make art for the site. The list includes notables like Max Capacity, Mr. GIF, Totally Fucking Radical, and Lacey “lulinternet” Micallef, Price’s girlfriend and a leading Tumblr artist.

“It’s brought this art out of its hole in the Internet,” Micallef said. “It has a much larger audience now. You may not be able to call it ‘net art,’ but they’ve all seen it.”

On Thursday the blog announced its Reblorg Residency program, which encourages Tumblr theme designers to submit their original themes to have featured on the site for 30 days.

Thriving yet relatively unknown communities like theme designers are the exact sort of thing Reblorg hopes to promote, Price said.

“I think it’s really cool to have an official-type place to dump some really awesome stuff,” Micallef said.

Original GIF by Gustavo Fajardo (g1ft3d) for the Daily Dot