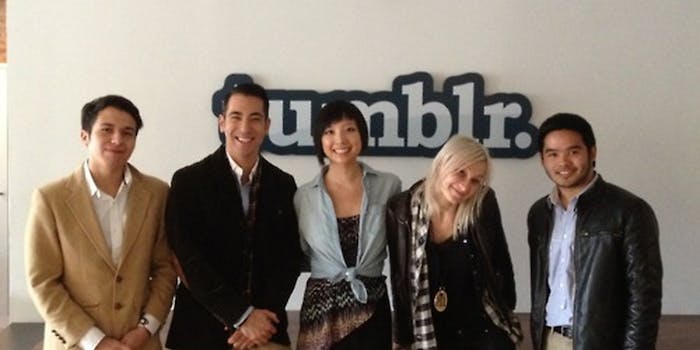 Tumblr has long been the community of choice for fashion icons like Jessica Quirk, Tavi Gevinson, and Bergdorf Princess’s Yana K. And for the past two New York Fashion Weeks—the industry’s semiannual cavalcade of style—it’s had a presence to match.

Shortly afterward, a scandal erupted over allegations that Tumblr was engaging in fashion payola by promising favorable coverage to brands that paid to sponsor bloggers. Tong left the company.

But Tumblr is planning to cover this month’s event with renewed enthusiasm. Today on the staff blog, Matt Hackett, Tumblr’s head of brand strategy and marketing, announced a partnership between Tumblr and Milk Studios to cover the event.

Milk Studios, a “group of seven companies that stand at the intersection of fashion, photography, art, and film,” put together a team of five “local emerging voices in fashion” to cover the week through their Tumblr blogs.

Tumblr users can follow the five bloggers—Alex, Bryant, Chloe, Lucie and Miguel—as well as the NYFW tag. While each of the five are arguably Tumblr famous already, they’re talking about it in dream-comes-true terms.

“I feel like I spent all last week thinking this was all a dream, and now it’s really happening,” Lucie wrote of her orientation day. “Honored to be a part of this group.”