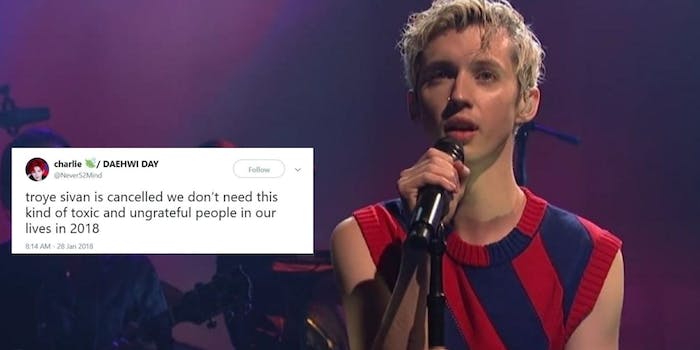 Troye Sivan threw away dead flowers, and some people actually got upset about it

Unless you’re saving that special bouquet you snatched at a wedding or collecting all the roses you’ve won on The Bachelor, there’s not much reason to hold onto flowers after they’ve died. Former YouTube star and current pop music sensation Troye Sivan understands that logic.

But some of his fans apparently don’t—and they’re angered that Sivan had the temerity to throw away a fan’s gift after that gift had died.

Now, they’re questioning whether Sivan, who broke into the mainstream even more with his recent appearance on Saturday Night Live, even cares about his fans.

It all stems from three tweets.

But at some point, somebody figured out that the flowers were beginning to wilt.

And if you look closely, you’ll probably notice that Sivan is wearing one outfit when he received the flowers and different clothes when he tossed them away. Meaning they were possibly taken on different days when the once-fresh flowers had, as we all must, begun their slow, inevitable march to death.

As NME notes, other reasons for Sivan’s actions are because he was entering an airport and couldn’t fly with the gift or that the original tweeter wasn’t even the fan who gave him the bouquet in the first place (those tweets don’t actually appear on the @lilactears Twitter account, meaning they were either deleted or faked).

But not everybody took a dim view of Sivan cleaning up after himself. In fact, some people reversed the storyline to commemorate Sivan’s actions and make him the rescuer of roses.