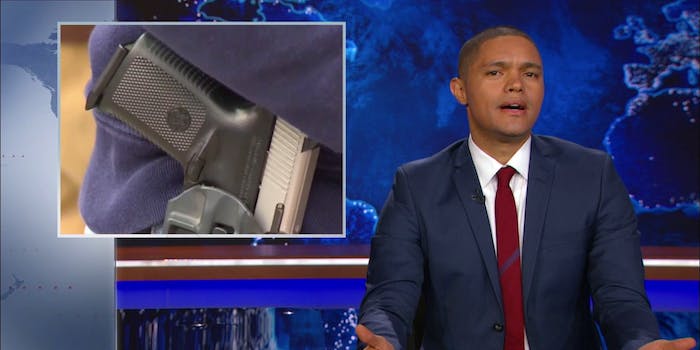 It reminds him of another group allowed to be who they are.

Starting Jan. 1, the state of Texas began allowing licensed gun owners to openly carry their handguns. But for some, it’s more than just a new law—it’s a way of life.

The open-carry law finally allowed handgun owners to embrace who they really are. They could walk on the street with their guns, and nobody could say anything about it. In fact, it reminded Trevor Noah of another time people were finally allowed to be who they are.

“This is almost a little bit like when gay people first realized that society was starting to accept that people might be openly gay, and they immediately went out and started dancing on truck beds dressed as giant penises,” he said. “Which, on the one hand, is great. I mean, you be you. But at a certain point, we get it. You love giant penises.”

Texas’s open-carry law have also sparked at least one very real and serious PSA that is making people pay attention for the wrong reasons.