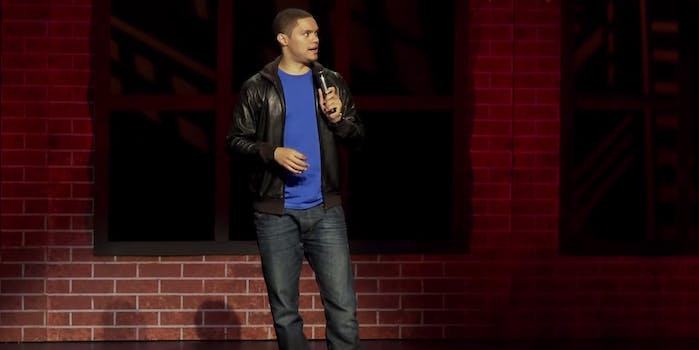 You should be paying attention to this hilarious comedian.

Trevor Noah is revered as one of the most talented, fast-rising young stars in the African comedy scene. He’s starting to make waves stateside.

Noah—who was named to Forbes’s 2013 list of African celebrities to watch—balances smart, hilarious observations with intimate insight to dissect subject matter that may otherwise be considered too painful or sensitive.

In the video above, the comedian recounts how difficult it was for him growing up as the child of a mixed race couple in South Africa during apartheid. While it’s a topic most may struggle find humor in, Noah does so flawlessly comparing the risk of his mother being caught with him to the illegality of a bag of weed. He follows that up by discussing how taken by African-American vernacular he is. He doesn’t call it hip; doesn’t even criticize it as being slang or Ebonics. To him being black simply means being yourself and being accepted. Later in the routine, with the same grace, Noah effortlessly tells one of the funniest Hitler jokes you may ever hear.

His humor contains the same honesty you’ll find in the work of fellow black comedians Dave Chappelle and Hannibal Buress. Noah’s brand of comedy is similarly important because while he encourages laughter, he also fosters conversations about race, immigration, and class.

His talent has not gone unnoticed. Beginning in December, Noah will join The Daily Show with Jon Stewart as a regular contributor.

Thank you so much for all your love and support. Being a part of @TheDailyShow is such an honour. I can’t wait to start.

Just a few years ago Noah became the first South African standup to perform on either The Tonight Show or The Late Show—let alone both.

In 2013 his Showtime special, Trevor Noah: African American premiered in the U.S. to positive reviews. Last fall, Deadline reported that Will and Jada Smith’s production company, Overbrook Entertainment, had succeeded in selling a half-hour sitcom starring Noah to Fox. The show is set to be written by former Modern Family writer Sameer Gardezi.

With Noah and other young black comedians like Jerrod Carmichael and Jessica Williams starting to get the shine they rightfully deserve, the American comedy scene is going to get a lot more diverse very soon. Follow Noah on Twitter and if you want to see him live, and happen to reside in Australia, New Zealand, or South Africa, he’s on tour in those countries right now.