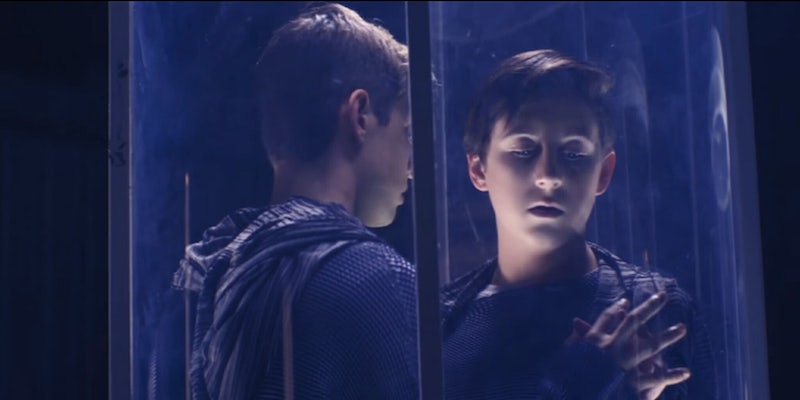 Fans of Trevor Moran are getting mixed messages from the YouTube star’s new music video.

In the clip for Moran’s latest single, “I Wanna Fly,” the 17-year-old YouTuber is abducted and brought to a strange room. He sees a man and a woman in a pod together, and two pod options for him. He runs to the one with another boy, and is able to lock hands with him before being pulled away and forced into the pod opposite a girl. He eventually breaks free and saves everyone but himself.

Moran made a name for himself as part of Our 2nd Life, the now disbanded collaborative channel with fellow YouTubers Kian Lawley, Jc Caylen, Connor Franta, and Sam Pottorff. Moran was the youngest in the group and never explicitly confirmed his sexuality. He’d previously told People that the song was about his mother, but the music video speaks differently. Fans and friends have taken the video in different ways, with some celebrating it as a coming out while others debate if he’s just acting.

Pretty sure @TrevorMoran is lowkey gay tho.

His former collab-mates also lent their support to the video release, which was timed to Moran’s 17th birthday.

I'm very serious when it comes to being the first person saying happy birthday and I won(in a text)! Love you @TrevorMoran ❤️❤️❤️❤️

HAPPY BIRTHDAY TO @TREVORMORAN!! I'm so glad he's such a big part of my life i don't know what I'd do without him pic.twitter.com/Qly8zvvkVd

His costar Jacob Reinhard congratulated Moran with a series of emojis that implied men, rainbows, and kissing.

#IWannaFly out of the closet

Earlier this year fellow YouTuber Joey Graceffa used a music video as a coming out, before further discussing his sexuality in a vlog and in his book. Moran has yet to make such statements.

It's my birthday.. Do I get a boyfriend now?