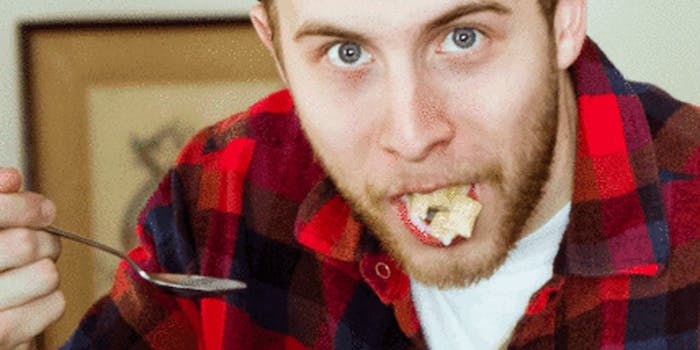 She drank while pregnant, tends to leave her kids alone in the car, and is just out for fun. Now you can find out who she really is.

That dumb girl you went to high school with— the one who believes Applebee’s is the pinnacle of culinary delight, craves Smirnoff Ice, and thinks Maroon 5 is epitome of good music—actually has a brain behind her.

A guy’s brain, in fact. Travis Helwig, an actor, comedian and writer living in New York, is the genius behind your favorite Twitter account, @FriendFromHS.

Helwig can’t pinpoint why or how he thought of starting the feed, he said in an email interview with the Daily Dot. But he was intrigued by the idea of mocking the awful, annoying acquaintances from high school who fill his Facebook feed.

“What I liked about the idea was building a story, a world, and characters around the trope of the awful Internet posts we all sort of know,” Helwig said.

The world he created has been a hit since he started in May. The feed—known as a parody—boasts more than 45,000 followers and a loyal fan base. In fact, they were bubbling over with excitement when his character gave birth last week to twins.

Helwig credits his comedian friends for helping him come up with story arcs and tweets.

The reason for the popularity? Helwig speculates that FriendFromHS hits some major chords on Twitter. She’s relatable, very American and has a tendency to celebrate people who do horrible things (see: Kardashians).

“Whether it’s reality television, using ‘party’ as a verb, or couching racist things with the phrase ‘I’m not racist, but,’ we can relate,” said Helwig. “I just take those concepts and try to heighten them to an extreme that is a bit surreal.”

FriendFromHS is known on Twitter for both the horrible things she does, like drinking during pregnancy, and for her utter cluelessness. For instance, she only comments on the news when everyone is done talking about it.

“I usually just come up with a specific topic, then figure out what her take would be, while attempting to be surprising, and then the grammar comes last,” said Helwig. “I’ll spend the most time rewriting the language to make it as a ‘txt-esque’ as possible, while still being readable.”

Helwig uses his friend, Allison, (who he has known not only since high school, but elementary school) for the TwitPics and Twitter avatar—with her permission. He hopes to include more pictures soon.

Helwig hadn’t planned the whole story arc that paid off with the birth. But he did have enough foresight to launch his character by announcing the pregnancy. From there, the story just took off.

“They were the very first tweet,” he said. To be honest, I hadn’t planned anything from the pregnancy. It was another spur of the moment idea,” he said. “I was on a train back into New York and just said, fuck it. Lets have ourselves some babies.”

Helwig considered ending the feed with the birth but decided against it.

“Things needed to be refreshed a bit in my mind, so adding the children into the mix lets me play with a whole new type of annoying Facebook user,” said Helwig. “New mothers, my sister included, love to over share about their dumb kids.”

While FriendFromHS will live on for a while—he’ll stop tweeting once it stops being fun—he hopes the account stays a satire and that no one like her exists.

“I honestly hope no one on earth is like FriendFromHS, but I’ve found a few Twitter accounts that make her look like a fucking nun,” joked Helwig. “This has saddened me deeply. Very, very deeply. This is a cry for help.”

>>Here are some of our favorite tweets.