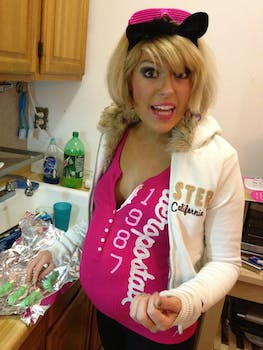 If you have an extra Four Loko in your fridge, send it to @FriendFromHS. She totes had a stressful delivery last night.

The popular Twitter account details the everyday life of that stereotypical and annoying blonde you begrudgingly went to high school with. You know, that one: She doesn’t quite pay attention to the news, is forever confused by the iPad, and gave birth to two girls, Jon Benet and Caylee. Before she hightailed it to T.G.I. Fridays, she numbed her pain with Four Lokos and hoped someone recorded Whitney for her.

“my baby girls are so beautiful. i promise i will love and protect you until the day i die. ALSO I JUST LOST 20 POUNDZ!!!!!!!!!!!,” she excitedly tweeted.

Some of her 45,000-plus followers wished her well and lauded her courageous live-tweeting. Cayla Lewis tweeted “Y’all @FriendFromHS just had her babies, after she drank a shit ton and complained. Let’s all wish her congratulations.” Another fan tweeted to give her a “round of applause.”

Comedian Travis Helwig, who runs the account but only has a fraction of the followers, called the act “Debbie Ex Machina,” a nod to the literary device deus ex machina, where a problem is abruptly solved.

Helwig has been running the account since early summer, and his spot on observations (and spelling) has earned him a legion of fans that easily relate to it.

“Why is everyone losing their mind over this @friendsfromhs? I have to deal with this all the time on Facebook,” tweeted Kate T.

So, congrats @FriendFromHS from everyone at the Daily Dot. We’ll buy your kids something nice this holiday season as we shop “da way jesus wanted!!!!!”