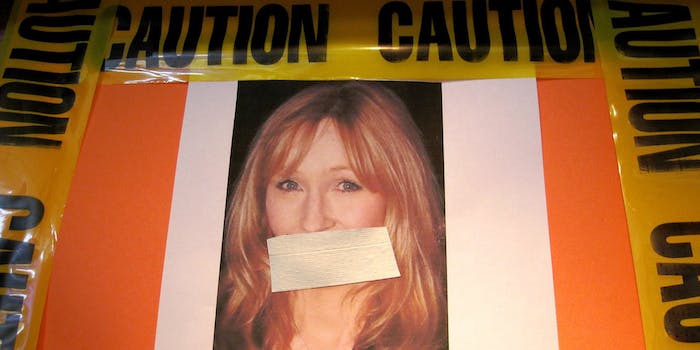 Celebrate the 30th anniversary of Banned Books Week with these must-follow authors.

The 30th anniversary of Banned Books Week officially kicked off Sunday, uniting lovers of literature to celebrate and defend the freedom to read challenged works of fiction.

Everything from the classics you had to read in high school to the hottest bestsellers have been challenged, and while some of those authors are no longer alive, many have found their own voices online.

The American Library Association (ALA) is celebrating this year with a 50 State Salute and Virtual Read-Out on their YouTube channel. In turn, the Daily Dot compiled a list of frequently challenged or banned authors on Twitter.

So grab your favorite banned book and see what else these writers have to say.

Some of Blume’s most famous novels (e.g. Forever and Are You There God? It’s Me, Margaret) have been challenged since the ALA started keeping track of statistics, and five of her novels appeared on the ALA’s most frequently-challenged books list. On Twitter Blume gives followers a glimpse into her life, and after she revealed that she had been diagnosed with breast cancer last June, many fans sent well-wishes, for which she was thankful.

“@Rayme_Michaels: @judyblume Humor is the greatest thing imaginable! That and sex.”//How about humor during sex?

Myracle’s ttyl; ttfn; l8r, g8r series reclaimed the top spot of the Most Frequently Challenged Books of 2011 over complaints of offensive language, nudity, and religious viewpoints, among other things. A frequent tweeter, she interacts with other writers online, and even manages to hold discussions about “slut-shaming” with her followers within the character limit.

@AnimeJune …it makes me sad that women still use anti-women words to each other. But since if I don’t speak up, how wld they know, right?

Named the Most Interesting Twitter User to Follow by Mashable, Johnson, a YA author, is an avid tweeter who interacts with her fans while holding discussions with her fans and doing giveaways (although you might not want to put her on text alert). Her 2004 novel, The Bermudez Triangle, was challenged in July 2009 by the Leesburg Public Library in Florida, due to sexual innuendo, drug references, and other adult topics, according to the ALA.

I see so much Banned Books Week stuff that I occasionally have to stop and remind myself that we ACTUALLY BAN BOOKS in America.

Love it or hate it, James’s Fifty Shades trilogy is flying off the bookshelves—although some libraries are refusing to stock it on theirs. It might be too soon to make an ALA list, but the racy trilogy has already been banned (or at least not ordered) by libraries in three separate states over its steamy content.

Before Gossip Girl became a successful TV series on the CW, it was a series of YA novels, and they are ninth on the ALA’s Most Frequently Challenged Books of 2011 list for drug usage, offensive language and sexually explicit material. von Ziegesar doesn’t tweet as often as some of the other authors on the list, but she liveblogs Gossip Girl when it’s in-season.

Shame on you Lily. You just like having men fight over you. Don’t we all? #gossipggirl You idiot!

Hopkins’s novel Crank was the fourth most-challenged book of 2010 for drug mentions, offensive language, and sexual content, but by the time her book made the list, it was old news to her. The candid author will tweet on anything from politics to her travels all while interacting with fans and fellow authors alike.

Alexie’s novel, The Absolutely True Diary of a Part-Time Indian, landed fifth on the ALA’s Most Frequently Challenged Books of 2011. After he and many Native American authors found their books blocked in Tucson, Ariz. public schools as part of a state ban on ethnic studies, he took the news in stride, claiming it gave their books enormous power. Alexie’s Twitter is part wit and part commentary on current events and everyday life.

The way you drive your car reveals your character more clearly than you’d like.

Atwood’s The Handmaid’s Tale was the 39th most-challenged book of the ‘90s and was included as one of TIME’s top book controversies after a superintendent in Judson, Texas, banned the book from an advanced placement English class following complaints that the book was sexually explicit and offended Christians. Atwood’s Twitter, on the other hand, is full of retweets from fans and updates on her many public appearances.

Must go now + do my homework. Can no longer say that cat ate it, alas. Night all, from Denver.

The Harry Potter series has captivated millions around the world, but it is also the top banned and challenged book in the last decade. Critics believed the series promoted the occult and Satanism, and some people have even taken to burning copies of the books. Rowling hasn’t used Twitter much since she created her account in 2009, but with the recent release of her new book on Sept. 25, she’ll have an attentive audience when she decides to tweet again.

As you may have heard, I have a new book out later this year. Very different to Harry, although I’ve enjoyed writing it every bit as much.